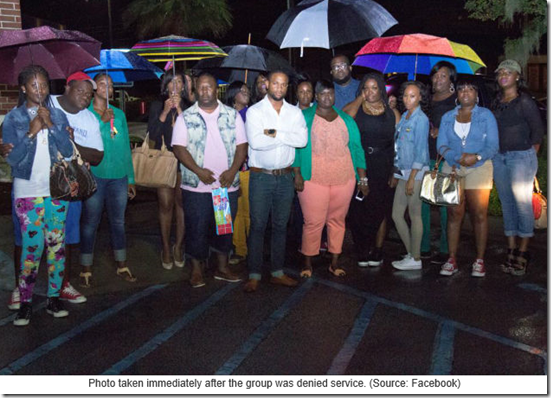 Coming across the DailyKOS diary titled Restaurant Asks 25 Black People to Leave Because 1 White Person Feels “Threatened” was depressing. Is this 1953 or 2013? Is this a joke or one of those headlines trying to get one’s attention? That was not the case.

Turns out according to the story reported on Live HD 5 News (WCSC), Michael Brown, a frequent patron of Wild Wings Café visited the establishment with 24 family members to bid farewell to a cousin leaving Charleston. The party of 25 waited 2 hours to be seated. Upon being seated, they were told by the shift manager that there was a problem. What was the problem? One white patron felt threatened by the presence of the party of twenty five blacks.

Michael Brown said many calls were made to Wild Wings Café’s corporate office in Mt. Pleasant but received no callback until he posted the following message on Facebook on Thursday.

I will never go to Wild wings cafe in N. Chs again! We (Party of 25 family and friends) waited 2hrs, patiently and were refused service because another customer (White) felt threatened by us. This type of racial discrimination is unacceptable and we have to put a STOP TO IT. The manager looked me dead in the face and said she was refusing us service because she had a right to and simply she felt like it. DO NOT SUPPORT THIS ESTABLISHMENT… PLEASE SHARE THIS POST… We need your help.

A Wild Wings Café representative contacted Brown and said they had a really good conversation. Brown said he received an apology and the offer of a free meal for the entire group. He was not however satisfied. He said they did not go to the establishment for a free meal. They went there to patronize the business. He said the problem was much deeper than that.

It is indeed. There are many lessons here.

First, Wild Wings Café shows the extent to which white privilege remains. Is there a question when one patron’s white hue supersedes the economics of 25 black patrons? For every two steps forward that are made against racism, there seem to be a step backward. This one reported incident is likely statistically representative of many that go unreported.

Second, the corporatocracy does not respond to the individual. They do monitor their perceived persona on social media and in the media in general because that affects their bottom line. One person cannot fight the corporation but people banding together can and must. As such it is imperative that Americans find groups to supplement social media where they can make their voices amplified (Move To Amend, Coffee Party USA).

Lastly, everyone must continue to fight vigorously to ensure the Internet remains wide open. It is the last bastion of democracy. As incidents like this are duplicated they must be disinfected with sunlight and transparency. Many companies will continue lobbying Congress against Net Neutrality to lock down the Internet as they have been trying with PIPA , SOPA, and other devious policies. They know that collective knowledge and actions will prevent their continued pilfer of and bad deeds on the American citizens.