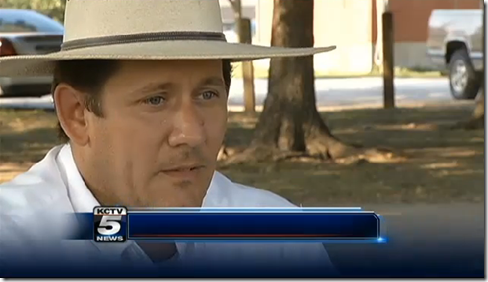 The Rodeo Clown that disparaged the President Of The United States, Tuffy Gessling, called KCTV to request that they interview him to “clear the record”. The KCTV5 interviewer, Alice Barr, made this an attempt to rehabilitate Gessling instead of probing him for the definite racist context of his rodeo clown performance in Sedalia, Missouri at the Missouri State Fair.

The following snippet from an AP article describes the night at the fair.

Perry Beam, who was among the spectators, said “everybody screamed” and “just went wild” as the announcer talked about having the bull run down the clown with the Obama mask.

“It was at that point I began to feel a sense of fear. It was that level of enthusiasm,” Beam, a 48-year-old musician from Higginsville, said Sunday, referring to the reaction from the crowd that filled the fair’s grandstand.

He said another clown ran up to the one wearing the Obama mask, pretended to tickle him and played with the lips on the mask. About 15 minutes into the performance, the masked clown had to leave after a bull got too close, Beam said. [Source]

The interview starts with Gessling telling about the bad things that have happened to him since the racist skit. He said, “I have had one lady spit in my face. Call me a dirty name a dirty name, spit in my face and walked off. … I have had somebody threaten to run me over. One of them wanted to burn the house down.” In other words it is all about long suffering Tuffy Gessling who is just being attacked for making a joke.

Barr said Gessling told her it’s the hate that brought him out to speak. He then said, “I didn’t do this to do any hating on anyone. I did it to be funny. I did it to be a joke. This bit, this clown bit has been around for a generation. And I didn’t think any more on it. And what we have done 15 years ago, 10 years ago, five years ago, when we’ve done it with Bush and Clinton and Ronald Reagan … I never did anything because of anybody’s race. I don’t care what color somebody is, if they are blue, white, green, polka dotted, stripe it doesn’t bother me one bit.”

Why did she not explore his thoughts on the Right Wing’s fascination with his attack on the President and why Glenn Beck would feel it necessary to enter the fray and say “Today, I declare myself officially a rodeo clown” if it is true that the act was not political. One would think that she would ask why some would leave the event describing it this way.

“They mentioned the president’s name, I don’t know, 100 times. It was sickening,” Beam said. “It was feeling like some kind of Klan rally you’d see on TV.” [Source]

Barr gave Gessling not only a pass. She encouraged the use of her station to rehabilitate someone that is yet to atone for what he did. Additionally she allowed him to promote a gig he will be a participant in. She allowed him to invite other politicians to the gig and grill him. He then ended with a snarky invitation to the president saying, “If president Obama turns out, I will be honored to shake his hand.” Racists get away with their deeds because the mainstream media always give them a platform to attenuate their evil deeds.