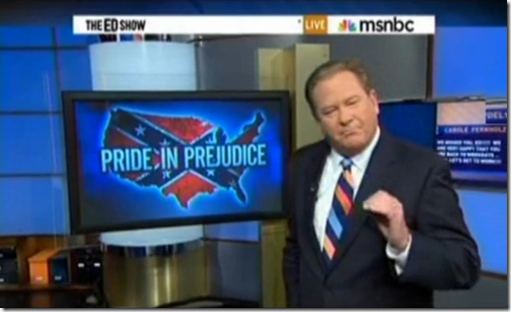 Last Friday MSNBC Ed Schultz had a town hall in Alabama. He wanted to go to the Deep South and talk directly to the people. He complained about the Right Wing talking heads using a narrative of dependency as well as race bating to create a level of angst within the white community. One wonders if he expected to have two women in the audience with prescient stories that put it all in a microcosm.

The following is the transcript of the video that follows. The two women made explosive accusations against many white churches in the South and against local Republican Parties. While many may find what they are saying hard to believe I have had many Republicans in our local Baptist churches tell me similar stories.

ED Schultz: Last Friday night I did a town hall meeting in Birmingham Alabama. … This is what an Alabama public school teacher came to the microphone and said.

Alabama Teacher: I have been a part of public education since 1970, when the schools were first integrated. I see more hatred in the South now than I ever saw in 1970 and I will tell you why. It’s been preached in the pulpit. It’s in the White churches. They are teaching people that if you vote anything but Republican, you are going to hell pretty much.

ED Schultz: Oh! They are preaching it and people are buying it. One Alabama state legislator told me a chilling story about a recent attempt to segregate a local school.

Alabama Legislator: I got a call this week from a White female Republican. We have a school district in our county that has made an application to become independent. The reason she called me was because in the church this past Sunday, they were bullied and told you’ve got to support this school district pulling away from the county so we can minimize the number of blacks that are in our school district. Even though she was Republican she was disheartened because she says she never looked at the party from that perspective.

Many believe that Americans spend too much time on race issues. The reality is that it is important to do so especially now. The Right Wing’s Southern Strategy is in full vogue. What makes the women’s statement important is the context.

Martin Luther King said the most segregated hour in America is at 11:00 on Sunday mornings, during church services. That presents several realities. It allows those of ill will to use that homogeneity to indoctrinate and to foment a false reality to be feared, a fear of the ‘the other’.

With the church providing the moral permission to be fearful and ‘hateful’ of ‘the other’, it is not difficult for the Right Wing hacks like Rush Limbaugh, Sean Hannity, Bill O’Reilly and others to finish the indoctrination. This evil most be continuously exposed and disinfected.