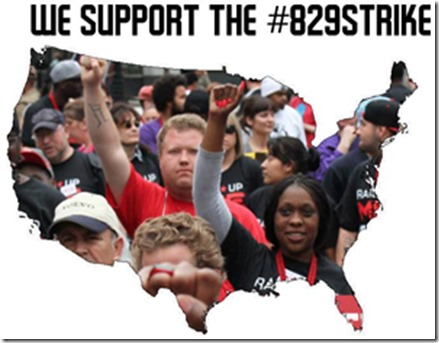 Fast food workers walked out in protest on Thursday demanding $15.00 an hour. They simply cannot afford to subsist on the current wage structure. The American worker in general simply cannot live on the wages many companies as big as Wal-Mart and as small as a Subway franchisee are willing to pay, many with no healthcare insurance. Many of these companies say they cannot afford to or it will negatively affect their profits.

It is however much more sinister than that. Every company that has a cost structure that includes paying below subsistent wages is a company with more than a failed responsible business model. It is a company that is a drag on the economy and it is a company getting a transfer of wealth from the taxpayer to the owners and shareholders of these companies.

A reporter on ABC said that workers striking for higher pay will be unsuccessful. She said that given the level of unemployment, employers have a large pool of people just waiting for a job. Unfortunately she is right. Unless the government ‘we the people’ set a minimum standard, a minimum wage that is a balance between a worker being able to live on an honest day’s work and a business the ability to make an honest profit, there will be no change. Unless the false narrative stating that only the private sector and not government are able to create jobs, there will be no change.

There is a lot that government can do now given that the private sector is unwilling to hire. There are canals to be built, high speed rails to be built, infrastructure improvement to be done, education improvements requiring teachers and professionals and much other needs clamoring for workers. The government’s impotence led by an intransigent Right Wing that sees full employment as a risk to a selfish business class is the sole reason these job creating programs are not coming to fruition.

Unemployment is serving the corporate structure well. Their profits are soaring. They can keep necessary jobs in the United States at low wages. They can export enough jobs to keep the unemployment high enough to depress wages. And they can use their ill-gotten profits to stop politicians from raising the minimum wage or from enacting programs that would dramatically lower unemployment. This can all change. But to do so will require educating Americans through alternative media networks void of the plutocratic message. It will require citizens that when made aware of the truth are willing to throw everyone opposing working middle class policies out of Congress and completely out of the body politic.