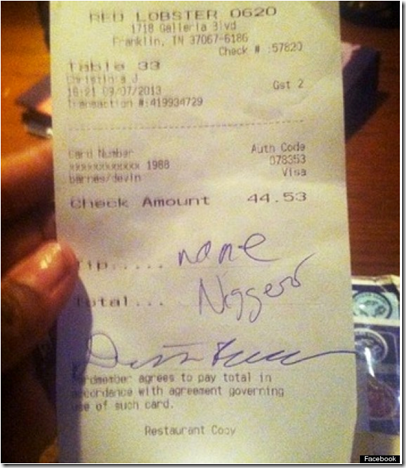 When I read the article “Waitress Finds ‘None, N****r’ Written As Her Tip From Racist Customers (IMAGE)” I just chalked it up to a racist customer. There are racist all over and it does not make any sense to give them the time of day. After all they are now a distinct minority.

The story is that a waitress,Toni Christina Jenkins, had a customer who treated her rudely. She maintained her composure and treated the customers with respect. When she received the restaurant’s copy of the receipt, it was evident why she received such rude treatment. Look closely at the receipt above.

Turns out that not only was Toni  insulted and maligned by a racist customer. She was also maligned and insulted by her employer, Red Lobster. As opposed to coming to her defense forcefully, she was suspended with pay for putting the racist receipt online which they claim is a policy violation. What ever happened to her first amendment rights. Who is the one aggrieved?

Red Lobster spokesman Mike Bernstein told The Huffington Post in an email that the company has temporarily suspended Jenkins with pay as a result of the incident, which he said is "standard procedure" when an employee violates a company policy (in this case, publicly posting a receipt.) But Bernstein emphasized that Jenkins has not missed a single day of work because of her suspension and is still scheduled to work this week as usual.

To donate to Tips for Tori, and give her the tip she deserves, click HERE.