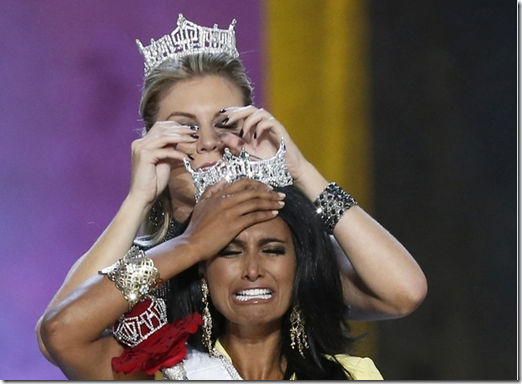 This year’s Miss America is the stunningly beautiful Nina Davuluri. She was crowned the 2014 Miss America Pageant winner last night. To be honest, I am not a fan of parading women on a stage being judged by middle aged men generally gawking at their physical attributes more so than their intellectual attributes. I understand these ladies win scholarships and do otherwise good community service. That is no excuse for these types of contests.

That said, I knew it would not be long before the Twitter space was engulfed with the cancer that still afflicts a distinct minority in this country, racism. What is sad is the racists online in their utterances not only show that they are racist toward others, but they show they are patently ignorant and uninformed.

Ms. Davuluri, 24, is of Indian descent but is a full blooded Syracuse New York born American citizen no different than any blue eyed blond American lady.

The following is representative of the racist and rather ignorant tweets. One can see the distinct similarities with the statements one would hear from hacks on the Fox News channels and from other Right Wing mis-informers. It is evident they have been effective in educating their base. This is what makes these Right Wing hacks so dangerous.

It was refreshing when the counter punch came to attempt to enlighten the ignorant and ill-informed.

It should not have mattered anyway. Supposed the winner had been an Arab of American descent? Would she not have been considered a full blooded American? Many want us to simply ignore these issues believing they will go away on their own. Ignorance does not go away on its own. It festers like a cancer.

Racism is caused by a certain carnal ignorance that requires the disinfectant of exposure and constant education. All Americans must make the racist thought process as painful as possible to racists. That is how we rid ourselves of overt and reflexive racism.