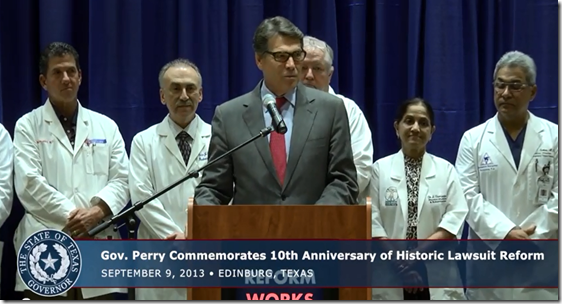 Texas Governor Rick Perry has been one of the biggest obstructionists to the Affordable Care Act (Obamacare)  in Texas along with the entire Republican Party nationally. Inasmuch as Texas is the state with the highest rate of uninsured citizens he refused Obamacare’s expansion of Medicaid. For those with pre-existing condition in Texas who were either in the high priced high risk Texas insurance pool or were uninsured because of the cost of these high risk pools, Obamacare comes to the rescue even here in Texas.

My wife has Lupus, a pre-existing condition. As a small business owner I had a group plan with a professional engineering organization. After being extorted with rates that effectively cost us north of $20 thousand a year over a decade ago I migrated to a high deductible catastrophic policy for my daughter and myself, an inexpensive student policy for my daughter while in college, and the Texas High Risk pool for my wife. It was expensive but less than the  previous policy. Over the long run it is evident that this would become unsustainable as all these policies increased in value at a much faster rate than inflation.

Then came Obamacare.  Obamacare means that effective October 1st, once again my wife, my daughter (while still in college and less than 26 years old), and me will be once again on the same policy at an affordable price. I already checked pricing and they are less expensive, reasonable, and provide much better coverage.

The real reason for this post however is the hypocrisy of the Republican Party in Texas. Republicans run Texas, not because it is a Red State but because it is the state with the worst voter participation. They run all departments. They run all agencies including the high risk pool. Today my wife received the following letter. 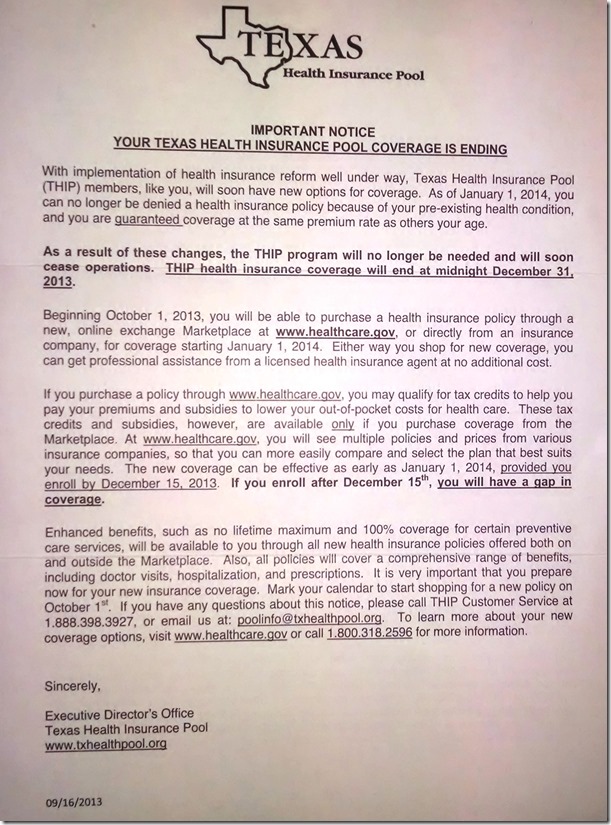 Important to note is that the letter correctly echoes the benefits of Obamacare for the millions in Texas and the United States with preexisting conditions. It correctly states that someone with a preexisting condition can no longer be denied coverage. It states forcefully (with an underline) that everyone is guaranteed the same rate given one’s age. It also correctly states that many will qualify for subsidies.

The letter even goes further in promoting Obamacare. It correctly states that there are no more lifetime maximums (in other words insurance companies cannot stop paying up to some maximum; bankruptcies be gone). It correctly  states that 100% coverage for preventative care is provided, and all policies now cover doctor visits hospitalization, and prescriptions. In other words charlatans can no longer sell worthless policies. Most importantly, the letter sends Texans to the correct website that will provide them accurate information instead of all the lies and misinformation provided in an orchestrated manner by the Republican Party. The misinformation and lies will directly cause the unnecessary deaths of many, mostly their own constituents and base.

This letter from a Texas agency is the best justification for Obamacare. This Texas government agency placed the wellbeing of Texans over politics.

After reading http://t.co/euLHOwKXap on Texas support of Obamacare you asked for PDF of letter: http://t.co/ovgtJZXLDO