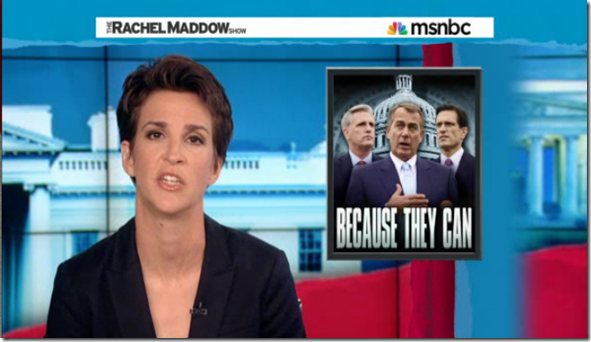 Make no mistake, Tea Party Right Wing Republicans have been clamoring for a government shutdown even before they were elected. During the 2010 elections they so debased government with their entire base and with gullible independents that many Tea Party candidates were talking about shutting the whole thing down while their voters (fans) cheered.

Of course most of their fans are dependent on the government, from social security, to veterans’ benefits, to government employment. The problem was that these candidates did not lead. They misled.

They promised to cut spending in a draconian fashion and blackmailed the president into sequester. Interestingly, the effects of the sequester on the economy and on federal programs have a much larger effect on the Republican base since Red State are much more dependent on the government than Blue States.

They promised to kill Obamacare. Obamacare has been the law of the land since 2010. There was no constitutional avenue to kill it barring it being ruled unconstitutional. When the Supreme Court ruled it constitutional there was only one option left, win the presidency.

The Tea Party Right Wing Republicans answer to having no constitutional method of killing Obamacare is to hold the entire country hostage. It is to do what the Tea Party faction of their party claim they wanted to do.

Rachel Maddow did a well-researched piece last night on what Republican obsession with killing Obamacare, irresponsible view of the national debt, and hate for government have caused. In the piece Maddow shows clips of many Republicans talking about shutting the government down in a very jovial manner. It is an important chronology of Republican intransigence and irresponsibility.

Maddow contrasts the accomplishments of government when the House of Representatives was in the hands of Democrats, politicians that seemed to want to accomplish much for the working middle class. They passed a healthcare law, a banking law, equal pay for women law, economy saving stimulus law, and much more.

Rachel factually illustrates that the Republican House of Representatives have accomplished nothing for the country in the two and a quarter years they have been in power. It has passed no meaningful legislation. It has passed no laws to aid employment. In effect it has been more damaging to America than if they simply stayed home in their district and did nothing. They have materially hurt the working middle class, the poor, and the economy at large.

Now with this government shutdown, they will cause more pain to all but a few American citizens. While their wealthy funders will be fine even as they continue to spend to misinform the Right Wing base, all will suffer as the monies government employees would have added to the private economy, mostly in Red States, is gone. The poor will suffer yet another damaging blow. The working middle class will continue their slide into poverty.