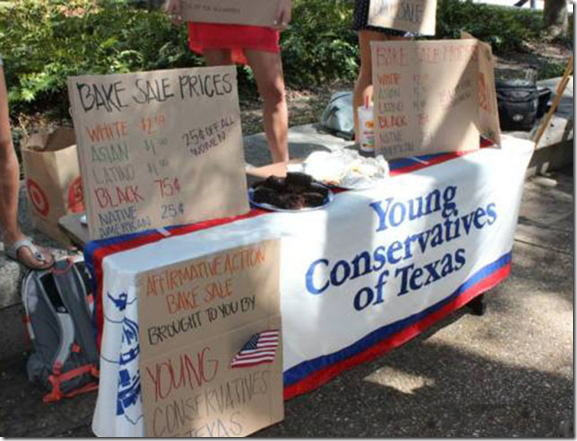 They should be embarrassed that this story was featured at NBCLatino.

A group of students at the University of Texas hosted a bake sale Sept. 25 that spurred much controversy on the topic of affirmative action.

The bake sale was held by The Young Conservatives of Texas (YCT-UT) and included “special pricing” for customers based on their race and ethnicity.

Lorenzo Garcia, President of the University of Texas Young Conservatives Club, explained to Total Frat Move how his group sees affirmative action and what led to the controversial bake sale.

“We’re against it,” said Garcia, speaking about affirmative action. “We don’t feel that it’s fair. It should be based on merit alone, instead of something you can’t control.”

Garcia, who described himself as a Hispanic from a middle-class family, says he is “kind of living proof that the whole [pro affirmative action] argument is complete conjecture. If they really want equality, to quote Martin Luther King Jr., judge a man not by the color of his skin but the content of his character, and that’s what we strive to abide by or live by, and they [liberals] are completely hypocritical about it. We’re just sick of it, so we’re just trying to prove a point, and stick it to them, to show them why they’re wrong.”

Funny that the president of the group is Lorenzo Garcia, someone that a few years ago would not have been welcomed  at the University of Texas Austin. Then again adoption of that ideology  is anathema to rational thinking.

The sad part is that this table is being run by young people. Word on the ground however is that they were ignored for the most part. They were marginalized as they should.