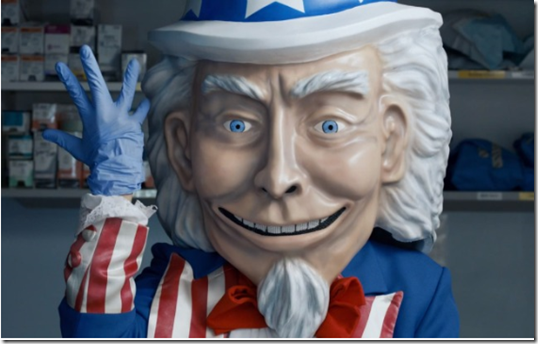 It is a sad state of affair when a political party encourages its citizens to do something that is against their own interest. It is bad enough that they have convinced many that constantly cutting taxes will miraculously prime the economy into robust activity. This however is immoral and sinister. The Affordable Care Act (Obamacare) has many features that save lives. In effect Republicans are telling young people not to bother taking advantage of preventative care offered by these policies. They are telling these young people to forego insurance even at the risk of going bankrupt if they get into an accident or god forbid get some bad disease.

The Atlantic The intentionally creepy ads — Generation Opportunity dubs their character “creepy Uncle Sam” — are part of what Yahoo reports will be a six-figure fall campaign at 20 college campuses to discourage healthy young people from joining the exchanges, which can only succeed if healthy young people as well as older, sicker people sign up for them. Also launching Thursday was a new anti-Obamacare ad from Americans for Prosperity, which is targeted at older female consumers, asking them to contact their representatives to complain about the law. These ads are set to run in swing states and have $3.1 million behind them, USA Today reports.

In the ad below a woman goes for one of those female exams. She is placed in the stirrups. The doctor then leaves the room. Suddenly Uncle Sam appears in between the young woman’s legs. The implication is that the government is being invasive. What is ironic is that it is Republican policies being passed throughout the country by Republicans legislatures and governors that are invading women’s privacy with vaginal probes and unnecessary medical procedures if they seek a pregnancy termination.

In the video below Uncle Sam shows up before a likely prostate test.

Poor GOP, it is as if they must inject creepily sexual to make a point. That speaks more about them than the law.