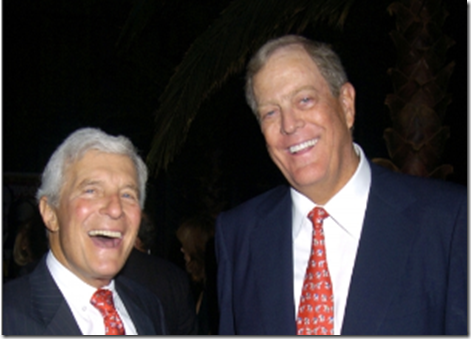 The Koch Brothers are crying uncle. They have abandoned the Tea Party government shutdown strategy. In fact they make the claim in their letter (the entire letter can be found below) that,

The Koch Brothers may want America to believe that. The statement is not accurate. On February 14th, 2013 Matte Kibbe of FreedomWorks sent out a letter. The letter titled “Coalition Letter: Congress Must Honor Sequester Savings and Defund ObamaCare Before It Is Too Late” said that,

Conservatives should not approve a CR unless it defunds Obamacare.  This includes Obamacare’s unworkable exchanges, unsustainable Medicaid expansion, and attack on life and religious liberty. [Source]

On October 1, 2013, open enrollment begins for the federally backed health care exchanges. On January 1, 2014, new money from Washington will begin flowing to states and individuals, all but ensuring that these new entitlements will become a permanent fixture of life in America. The window of opportunity to stop the implementation of these massive new subsidies is closing. Although many of Obamacare’s provisions are now the law of the land, many of the law’s most damaging and irreversible provisions do not take effect until 2014. [Source]

FreedomWorks is one of the many organizations that are funded by the Koch Brothers. The Kochs are part responsible for this Tea Party government shutdown strategy. There is no doubt about it.

It is clear from the letter that the Koch Brothers were shaken. They want to us to ignore the New York Times article. They want to dispel Senate Majority Leader Harry Reid’s implicating them in the shutdown.

It is evident that the shutdown has become a train wreck for the Tea Party. By implication it could damage the reputation of the Koch Brothers with their own base, the Right Wing of the Republican Party. They get little benefit from being associated with of Michele Bachmann (R-MN), Steve King (R-IA), and the other sophomoric architects of the government shutdown strategy. 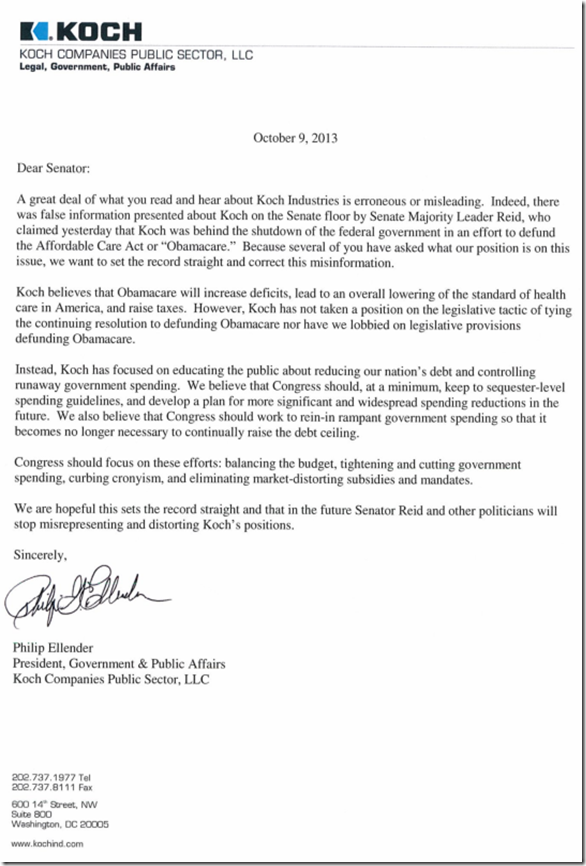