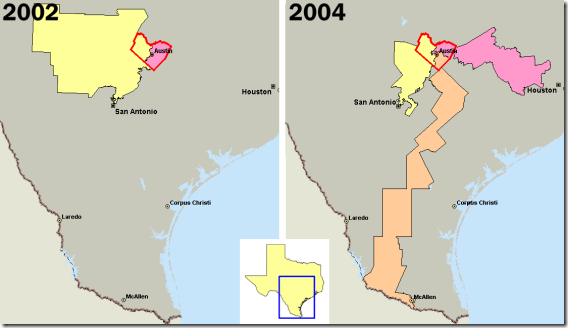 GOP Gerrymandering is a clear and present danger to America. It is destroying the fabric of the American society. It is mostly responsible for a failing middle class, a faltering economy, and hate. The party that has gerrymandered majority representation out of a minority has used race, class, and economic deception to achieve its goals.

Many people say America gets the government it elects. It gets the government it deserves. It is easy to read books like ‘What’s the Matter with Kansas?: How Conservatives Won The Heart of America’ or ‘The Political Brain: The Role of Emotion in Deciding the Fate of the Nation’ and come to the conclusion that, that is true. These books would have one believe that those in the know are responsible to personalize messages for the ‘dumb’ Americans. That is not  the case.

Americans voted for politicians who articulated better policies for the working middle class. Extreme GOP gerrymandering corrupted the outcome of the House of Representatives whereby the GOP garnered a majority.

All parties in control of their states gerrymander. That is a defect in the political process that has been exploited for some time. The GOP gerrymandering has reached unprecedented levels now. Their majority in congress does not reflect America at all. It is a sham.

Is this type of GOP gerrymandering unconstitutional?

The short answer is no. The long answer is more  complex.

While the Supreme Court ruled in 1986 that partisan gerrymandering was unconstitutional and could be challenged in court [5], it set such a high standard of proof [6]that it made legal challenges of such districts extremely difficult. Since then, the Court has remained divided on whether there is any viable way to set a judicial standard for what makes a given district an illegal gerrymander. [Source]

How exactly does GOP gerrymandering work?

Have you ever wondered why your city is cut into several districts that seem to run into rural areas afar? GOP gerrymandering is all about the math and the type of voters.

The result of usurping power in this manner is a disconnect between the politician and the represented. It is a cancer that causes the disenfranchised voter to grow more apathetic and refrain from further voting. This snowballs into more unbalanced representation as the voting population’s values are weighted much more than the values of the nonvoting apathetic citizen.

An extreme Tea Party is the type of result that occurs. They have become a group of people whose districts because of GOP gerrymandering is out of step with most of the voting citizens. Because it is difficult to un-elect them they can temporarily hold the majority hostage.When their misdeeds materially affect their base, reality sets in. They can hide no more. They are eventually forced to capitulate. They must give in.

Voter registration, voter empowerment, and voter encouragement can mitigate extreme GOP gerrymandering in most areas. There are not enough Republicans for this not to be true. In the end non-partisan bodies must become the norm to redraw districts. Then and only then, Americans will pick the politicians that really represent their interests. Every Democrat and Republican will have to earn the American citizen’s vote.Every vote will the count.