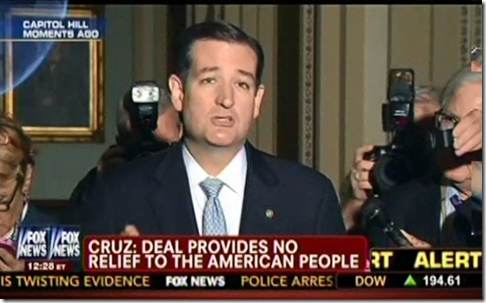 Ted Cruz is a junior senator with less than one year experience in the Senate. How did he amass the power to inflict the damage he has on the American government and economy? How did he bring the GOP Civil War that much closer?

To understand the mentality one would have had to watch the Ted Cruz campaign as it happened in Texas. Texas is a state where very few people vote. Moreover, many of those that vote are Right Wing Conservatives. As a proportion of those that vote, they are plentiful. Ted Cruz roamed the state as a Tea Party candidate that defeated an establishment candidate. When he defeated David Dewhurst he did so with the Tea Party ‘grassroots’.

Anyone attending one of his rallies would believe they were in a confederate rally ready to go to war against the government. Many openly spoke not only of a GOP civil war, but an entire civil war in the entire country. They cloak this in the establishment taking away one’s freedom.

Ted Cruz came to Kingwood, Texas among other Texas towns, a couple months ago during the last recess. The Tea Party ensured the meeting and rally was well attended and the money from attendees poured in as he gave them the red meat of indoctrinating lies. Every politician leaving that meeting left empowered. Every politician likely felt that most of America was on his/her side.

Every American in Ted Cruz’s isolated bubbles is on his side. Unfortunately, Cruz chooses not to look outside the bubble. As such he disregards polls showing that most Americans do not want what the Americans in his bubble want. Most importantly, he represents a small misinformed segment of America. The freedom that he complains about losing is the freedom he is attempting to take away from most Americans.

In Cruz’s statement below it is clear he has laid groundwork for a GOP civil war. He makes it clear the establishment has won this battle. Most importantly he makes the claim that he is listening to the American people, they are not.

Groundwork For A GOP Civil War

Make no mistake; Ted Cruz is an intelligent man. Ted Cruz knew he would lose this battle. The Ted Cruz move with the backing of Heritage Action and an indoctrinated Tea Party had a purpose. It will either split the Party with a GOP civil war or have Republicans cower into appeasement to the Tea Party minority.

Ultimately the portion of the Republican Party that needed to cower got a feeble spine in the end. What is left; a GOP civil war. Stay tuned.