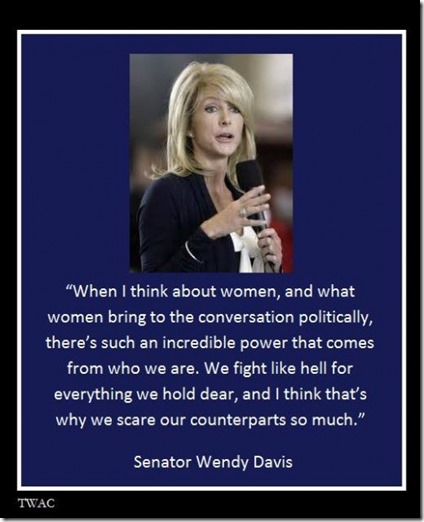 You have got to give it to Republicans, they are efficient. Why should they spend their time trying to adopt women centric and women friendly policies, when they can simply reduce their impact on elections? They simply institute  another form of voter suppression.

This year seem to be the year that America has taken several steps backward. The Supreme Court has started the rebirth of Jim Crow laws when it gutted the Voting Rights Act (VRA). Immediately after that ruling Texas Attorney General Greg Abbott tweeted “Eric Holder can no longer deny #VoterID in #Texas after today’s #SCOTUS decision. #txlege #tcot #txgop”

Yesterday the “The New Civil Rights Movement” reported the following.

Women are Wendy Davis’ natural base. Her eleven-hour filibuster of an abortion bill that closed family planning clinics in Texas is the reason she has the name recognition and the political capital to make a run for governor. Anti-choice groups who have never before had to spend money opposing a pro-choice candidate are scrambling to form political action groups to run ads against her. Texas Attorney General Greg Abbott, the man who is most likely to be her opponent, has been touting himself as the real pro-woman candidate for his success at collecting back child support from deadbeat dads. Now, Republicans have found what they hope will be a more reliable plan than trying to persuade women that Republicans have their best interest at heart:

As of November 5, Texans must show a photo ID with their up-to-date legal name. It sounds like such a small thing, but according to the Brennan Center for Justice, only 66% of voting age women have ready access to a photo document that will attest to proof of citizenship. This is largely because young women have not updated their documents with their married names, a circumstance that doesn’t affect male voters in any significant way. Suddenly 34% of women voters are scrambling for an acceptable ID, while 99% of men are home free.

Voter suppression schemes may be temporarily successful. What President Obama’s 2012 popular win in Ohio proves is that these types of voter suppression ultimately backfire. When you threaten someone’s inalienable rights, they generally respond.