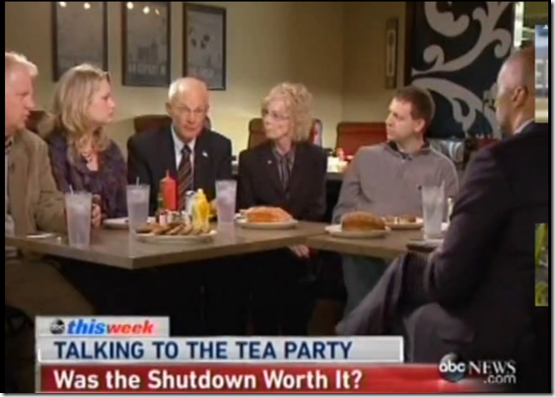 Ted Cruz actually has a constituency that continues to support his policies (or lack thereof) and tactics. This does not bode well for cooperation in government in the near term. Leaders need to lead.

Polls show that Ted Cruz, the Tea Party, and Republicans are taking the brunt of the blame justifiably for the government shutdown. The financial cost of the shutdown was $24.1 Billion. 800,000 workers were furloughed. Not reported as much is the effect it had on the healthcare of children and on the hungry. Not reported as much is the incalculable damage it has done on scientific research.

In their discussion these issues never came up or were glossed over. In their reality the government shutdown was a good thing; fiscal responsibility by all means necessary, even if it means being fiscally irresponsible and inhumane. That by inference is holding America hostage.

This group which is very representative of the Tea Party believes a government’s budget can be treated like one’s personal budget. They believe the grassroots of America is with them. This delusion is similar to the delusion of the 2012 election when less than favorable polls were replaced by their belief in a newly created ‘un-skewed poll’.

The frustration the gentleman speaks about at the end is real to him. The frustration they all feel is real. The answer is to lay to light the real causes of their frustration. It is not Obamacare. It is not government spending. It is a sect of the body politic that has indoctrinated them to look away from the real problems of the country. In effect the frustration is of their own creation which prevents solving the problems they are rightfully frustrated about.