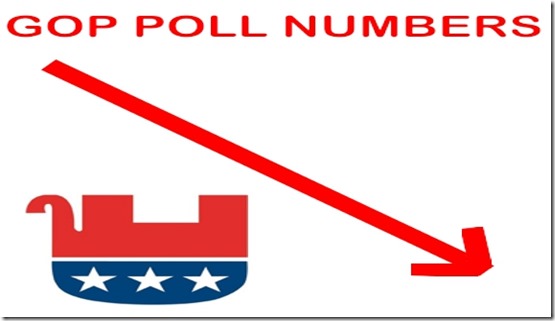 Three new polls were released in the last couple of days, CNN/ORC, Washington Post-ABC, & USA TODAY/Princeton Survey Research Poll. The polls indicate that the Republican dysfunction problem is much deeper than just the shutdown. This has not been explored much by the networks that have been ‘interpreting’ the polls for mass consumption.

The Washington Post-ABC poll is the most telling. The headline numbers by now are well known. President Obama is about even for handling his job (48/49 approve/disapprove). This is much better than Congress as a whole (12/85). The President is somewhat under water on Americans’ approval on his handling of the budget negotiations (43/54). This however is better than the poll numbers for Democrats (36/61). It is much better than the poll numbers for Republicans (21/77).

Most Americans believe the country is going in the wrong direction (28/68). President Obama is underwater on his handling of the economy somewhat (44/54). However the numbers indicate he is not taking the brunt of Americans' justifiable angst.

There is a very troublesome part of this poll that many will not report. Americans do not make much of a distinction between the Republican Party and its Tea Party wing.

The poll has an electoral message for Republicans. 66% of Americans now want to shop around. They will not blindly elect their current representative. By an 11% margin they want a Democrat over a Republican representing their congressional district.