Who Are The Real Takers? 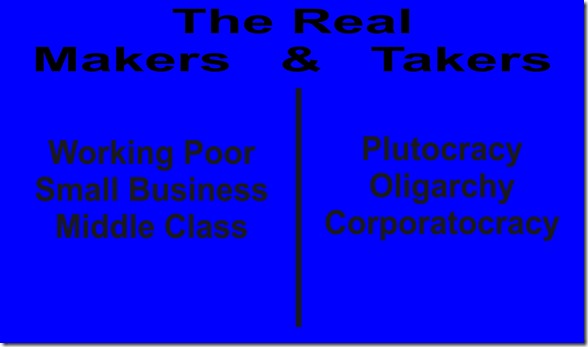 Does anyone remember the palpable fear we all felt during the collapse of the world’s economy in 2008? Here is a chronology that will make it seem fresh. Many thought it was the end of capitalism.

Once one’s memory is refreshed about what occurred, something becomes very evident. The collapse was a systemic failure caused by the actions of the titans of capitalism, the Plutocracy. The average American citizen was neither responsible nor did they have a clue as to the precarious position of the world’s economy. This is evident when one notes the economy was limping along somewhat fine even as the financial sector was in chaos.

Why talk about this now? This week Senator Elizabeth Warren (D-MA) said the following at the Mortgage Bankers Association’s 100th Annual Convention and Expo.

"While the crisis was massive and painful -- and its impact continues to weigh on middle-class families to this day -- its underlying cause was fairly clear, The GSEs [government-sponsored enterprises] made significant mistakes -- mistakes that cost taxpayers dearly -- but those mistakes were not the underlying cause of the crisis."

"Although Fannie and Freddie purchased securities backed by subprime loans, and some of those purchases helped fulfill their affordable housing goals, the St. Louis Fed economists found that the housing goals had no impact -- no impact -- on either the number of subprime loans originated or the price of those loans in the private-label market" "Affordable housing goals have been scapegoated by those who have been itching to get rid of the goals for a long time, but I think it’s time to drop that red herring."

Republicans have been trying to make the genesis of the financial collapse the fault of working middle class people who took out mortgages they could not afford. They wanted the narrative that the takers caused the crisis.

They also blamed government by claiming its regulations forced Fannie May to purchase bad mortgages in poor areas. This narrative was necessary to absolve the real culprits that caused the collapse of the world’s financial sector. This narrative is important. If the economic demise is caused by government policies that enabled bad fiscal behavior by those poor American citizens, then the bailout is not really a handout or corporate welfare. It becomes the responsibility of the government. To be sure, the narrative was debunked by this paper released by the Federal Reserve Bank of St. Luis.

In this paper we examined the effect of affordable housing legislation on the volume, pricing, and performance of subprime mortgages originated in California and Florida in 2004 through 2006. Using a regression discontinuity approach, we find no evidence that the affordable housing goals of the CRA or of the GSEs affected any of these outcome measures. This finding is robust to the inclusion of alternative controls, to the sample of only full documentation loans, and to different bandwidths for the regression discontinuity specification. While it is unquestionable that Fannie Mae and Freddie Mac held substantial amounts of subprime mortgages, and that their holdings of these securities played a significant role in their demise, the evidence in this paper refutes the claim that the affordable housing mandates were responsible for the subprime crisis.

Republicans have been attacking food stamp recipients, the needy, and the poor for some time now. They have systematically built a narrative in which the poor are characterized as the lazy takers.

What Republicans fail to see is that they are the real takers alongside the Plutocracy that is more aligned with them. Their policies extract wealth from the masses.

Fossil Fuel subsidies are nothing more that the extraction of income and wealth from the taxpaying working middle class Americans. These taxes are then transferred through various policy mechanisms to the Oligarchs. They are subsidized to pollute. They profit from healing us from the pollution they create. They profit from building and serving the military that keep the sea lanes open for them to move their products. In other words, these Oligarchs are the real takers.

One can enumerate policy after policy and action after action to illustrate that the real takers in this society are in fact many of the wealthy. People make things. The minimum wage McDonald worker is making your burger. The minimum wage care giver produces a necessary service. The janitor, the sanitation worker, the window washer, the gardener, the candlestick maker, the cook, the doctor, the factory worker, the engineer, the police person, the fire person, and every profession in between serve or make things.

Those that sit in an office as overseers of capitalism are the real takers. What is worse is that in their zeal for ever more extraction they almost destroyed the world’s economy. They needn’t fear however. The ‘takers’ came to their rescue.

Republicans are attempting to balance the budget on the backs of the poor and the working middle class. They need to have the narrative of the ‘makers versus the takers’ metastasize in the psyche of the average American to be successful.

Those on the other side, Liberals and real Democrats must take up the ‘makers versus takers’ narrative as well. It is a narrative that rings true. Show Americans where most of the federal tax dollars eventually end up. Let them know that they, the working poor, and the working middle class are just the conduit used to transfer wealth upward. It is all in the charts. The methodical transfer of wealth upward is all the proof needed to identify the real takers.