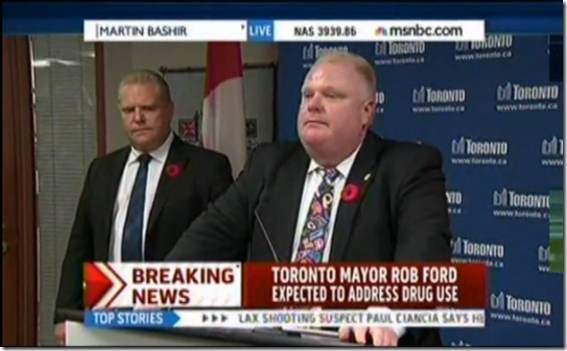 Mayor Rob Ford apologized profusely for smoking crack. He said that he felt a tremendous weight lifted off of his shoulders. Mayor Rob Ford says he was very sorry for embarrassing his  family, especially his brother. He continued to apologize to Toronto citizens.

Mayor Rob Ford said that Canadians live in a democracy. As such they will decide if he will  stay in office. He said in October 2014 Toronto will have their choice.

In other words, Mayor Rob Ford is not resigning. He made it clear as well that he is running for reelection in 2014.

It should be noted that Tom Ford has had substance abuse problems before. In 1999 he was arrested in Miami Florida driving under the influence.

He admitted to marijuana possession in April of  2006. He got the charge dropped without even going to court.Just like he is now saying he is  not an alcoholic nor a crack addict, he said  then he does not use drugs. “I’,m not of that scene”, he said.

It seems Canada may be a bit more forgiving than the United States. Then again there is always perennial politician Marion Barry.