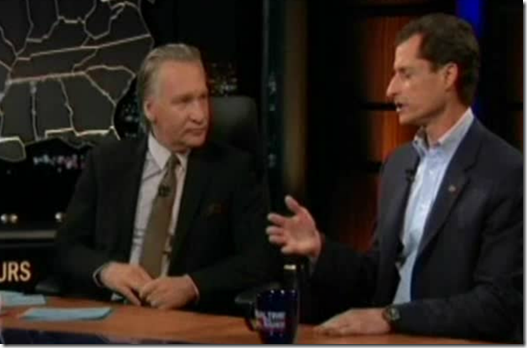 Many times one feels that the country’s puritanical attitude towards ones private life holds back the country. The fall of Anthony Weiner is a case in point. It is true that his online peccadilloes were strange to many. Many have even accused him of not having many friends, a thin legislative record, and camera focused. Of course that could apply to a vast majority of the 435 representatives.

What’s different however is that Anthony Weiner has command of the Liberal message. Pundits on the Right parrot talking points.  Pundits on the Left, refuse to get into the fight as they are bullied with inferior values and messages. Weiner was able to personalize the message. He could make the factuality of the message a cause célèbre. He displayed that in these three specific instances on Real Time with Bill Maher on Friday’s show (below, here, & here).

One hopes that more progressive messengers like Anthony Weiner will emerge. In the meantime, it is time for Weiner to come out of purgatory and re-engage. It is time to cut him some slack. He is doing a much better job than most of our spineless, soft, weak-minded Liberals by defending the message with facts and personalization. More of that is needed.

The following exchange is the type we need more of.

Bill Maher: I have heard you say when you were in Congress; you were always going for Medicare for All. That was the statement that kind of. I wonder if we had Medicare for All we wouldn’t be going through all these problems.

Anthony Weiner: To some degree the Left and the Right agree that the sentence everyone should keep what they had was a smart thing to say because frankly no. I don’t know what the insurance companies are doing in this transaction to begin with, what any insurance companies are. Look, we take our money. We give it to doctors. We give it to nurses and hospitals. And somewhere along the way insurance companies come in and take 25 or 30 percent of it. And now we are like so outraged that they are going to get a little bit less. Or that we are not going to be able to keep that same insurance policy. You shouldn’t keep it if it’s a crummy policy. Frankly we don’t need these insurance companies to do much of anything. And so, here’s what’s going to eventually happen. My Republican friends are going to say, “This is outrageous that you can’t keep it.” We are going to try to find a way to construct something that people are going to like. And what they are going to realize is that you ask people who are 59 in this country or 60 in this country whether they are eagerly looking forward to getting Medicare. And they are going to say yes. And the mistake we might have made here and I still think it was a mistake. Everyone knows what Medicare is. One year we make it for people who are 63. Then we move it down to 53 and then 43.  And before you know the entire country is covered by Medicare. We save a bunch of money. We take the money we were going to give to insurance companies. Instead we put it into healthcare. And we lower rates. Boom, you got your problem solved right there.

This A Progressive Messenger