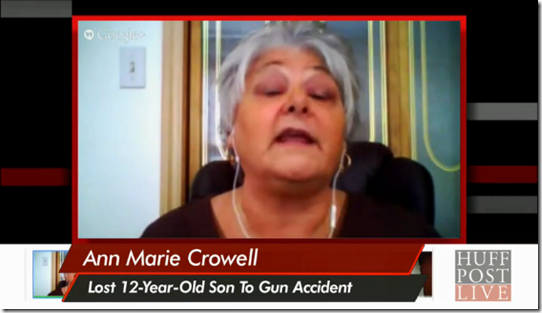 What will it take for Americans to get out of the grips of the National Rifle Association (NRA)?  When will they force the politicians to  act? How many more innocent children must die? How many more massacres must Americans endure?

These stories are of yesteryears and are still occurring today.

“The last words he said to his friend were, ‘I can’t believe you shot me.'”
— Ann Marie Crowell whose son was shot and killed by his friend on Christmas Eve in 1997

“The funeral itself, there were over 5,000 people who came.”
— Dr. Danny Dwyer whose five-year-old grandson was killed by an accidental gunshot in 2006.

Here are some realities.

The gun debate must be reignited. It seems that every few days there is some new form of gun violence manifested. The NRA and other gun activists have the cover of the national confusion shielding the daily gun massacre in the country. Unless we engage, the lives of all Americans are at stake.