I got health insurance at a great price 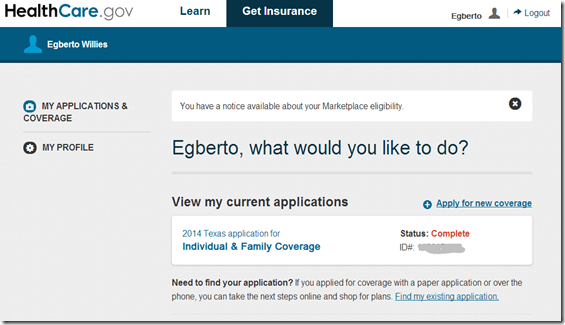 I just completed enrolling for healthcare insurance in the Federal Healthcare Exchange. Texas is one of the states where the governor, Rick Perry decided he would not set one up. Note Texas is the state with the highest percentage of uninsured people in the country. 25% of Texans are uninsured. If you would like to understand the plight of the uninsured in Texas (and likely around the country) check out this story, Texas’ Other Death Penalty.

The fact is that the Affordable Care Act (aka Obamacare, aka Patient Protection and Affordable Care Act, aka PPACA, aka ACA) has and will help all Americans with their healthcare security. It will save lives till we get the courage and wisdom to implement what the rest of the industrialized world has, real universal and efficient coverage through Medicare for All (Single Payer).

Anyway, here is my story. I am telling it with the hope that it will encourage those on the fence to engage. We need a citizenry to force politicians to do the right thing. It is our civic duty.

I started using healthcare.gov from day one and had the same bad experiences as everyone else. I decided to put off fighting through it because as a software developer I understood the backend and what could and would go wrong. I visited it frequently to take nominal metrics; page load time, errors, etc. This week I noticed a marked difference and decided it was time to complete the enrollment. It went without a software hitch.

As a self-employed software developer/business owner I am not afforded the great plans major corporations can provide for their preferred employees. I get no perks, no handouts, no kickbacks, no frequent flyer miles, no government assistance, and no free vacations. I get NOTHING. There are millions of small business owners or folks who work for companies that do not provide health insurance who are defined by this reality.

With a crazy governor one could never be sure when Texas for budgetary reasons would drop the high risk policy. People were dropping out which could have put its viability into question. She has already received her cancellation notice.

The Affordable Care Act (Obamacare) has begun to put some security, reliability, and fairness back into the health insurance system. This is the real story. Here are my results which is likely representative of millions.

I decided to go with a bronze plan to save money since I have had a mostly untapped Health Saving Account (HSA) for over ten years and as such the relatively high deductibles will not be a problem.

My daughter, who is in college in California, my wife who has Lupus, and me, for the first time in over a decade, are on the same plan. We also picked up economical (not the best but enough) dental insurance. Following are screenshots of what I will be paying.

I decided to go with a PPO instead of an HMO since I wanted the option for the family to choose the doctor of their choice whether in-network or not. In-network is very inexpensive after the deductible is met. Out of network is 80/20, we pay 20%. The maximum out of pocket expense is $12,500 and the individual deductible is $6,000.

These are real insurance plans that must follow the Obamacare baseline (there can be no caps, policies cannot be rescinded, policies cannot be denied because of pre-existing conditions, children up to 26 years of age can remain on parents’ policies, preventive screenings are free as a part of the plan, women cannot be charged more than men, and much more. It should be noted that Obamacare has afforded these patient protection rules to all health insurance plans not grandfathered. So it provides consumer protection and security for the vast majority of Americans.

I did not qualify for subsidies. However, the vast majority of people going to the exchanges will. It will reduce the price of policies substantially compared to my cost below.

As seen below my new monthly health and dental insurance cost now total $897.96. I thought it would have been more expensive since Texas did not accept Medicaid Expansion to Obamacare. Because our governor is refused Medicare Expansion to Obamacare, these policies include an additional cost that all those purchasing insurance must pay to take care of the uninsured. Sadly Texans double pay as their tax dollars help others around the country. This alone is a good reason to elect Wendy Davis, fiscal responsibility.

I am so use to getting absolutely nothing for free that these small breaks make me feel like I have won the lottery. Yesterday I had a flu shot and was asked if I had insurance. I told them I had it but it was one of those catastrophic policies. The nice lady told me to run it through anyway. I got a $29.00 flu shot for free. I was ecstatic. It was not about the $29.00. It was just a feeling of getting a break. I told the woman I had never had insurance pay for this. She smiled and said a lot has changed. She did not say more. After all we are in Kingwood, Texas, a home of irrational Conservatism and Obama hate. But her tone, smile, and antics said it all.

This year I had a colonoscopy for the first time in my life, one I should have had many years ago. I did not for two reasons. I was hesitant to find something as I did not want a pre-existing condition to affect the future possibility of getting health insurance at a fairly young age. Secondly my personal cost/risk analysis said to just hold out. I made a stupid choice based not on health but on finances and insurability. I had two benign polyps but polyps that could have mutated into cancer. I had the colonoscopy because in 2013 all policies had to abide by the Obamacare baseline and cover preventive care.

Over the years, amortized, I have paid hundreds of thousands into health insurance and have used almost no healthcare services. I have been a wealth builder for the shareholders and insurance company executives for decades. This is true for millions of my fellow Americans. Don’t you think it is time that the average American gets somewhat of a break? Get out there and ensure that the evil within the repeal Obamacare movement is thwarted. Get engaged. Protect the well-being of your family, your state, and your country.