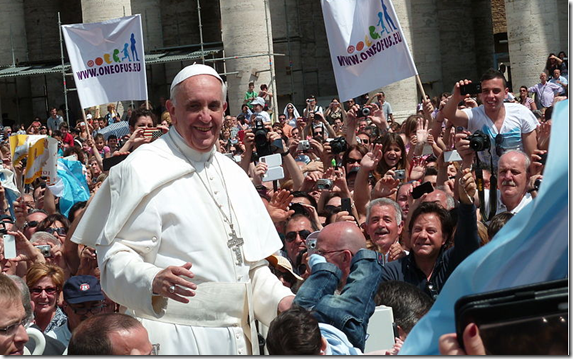 It is about time that the Church called a spade a spade. Pope Francis may turn out to be the loudest and most effective critic of unfettered capitalism with his stinging rebuke.

In fact even evangelical pastors are attempting to validate capitalism as some God divined economic decree. Texas pastor of Word of Life Church David Hope wrote an essay in the Kingwood Observer that would give Pope Francis pause. The piece titled “Jesus is not a socialist” was an attempt not only to justify the severe inequities of unfettered capitalism but to promote it.

David Hope attempted to justify a very unequal pie with the following.

Capitalism is like the kingdom of God. Everyone has an opportunity to make it to the top, but there won’t be equal outcomes. When government tries to manufacture equal outcomes, it brings everyone down. As people concentrate on the sizes of the pieces of the pie, the pie just keeps getting smaller. All the pieces get smaller and equal outcomes are still not achieved.

His simplistic statement does not take into account that those with inherited or ill-gained capital have a built in advantage that barring redistribution through taxes or some other method is unsustainable.

David Hope then makes a very disingenuous statement based on todays reality.

Capitalism is the most compassionate system. Capitalism is the best way to reduce poverty. It gives every man a chance to succeed, and it promotes wealth into the hands of those who serve others and have a heart to give to those less fortunate.

It increases individual wealth, thus allowing individuals to give out of their increase. God has designed the needs of the poor to be met by Christians, not by the government. Government’s bureaucratic shuffling of wealth accomplishes nothing.

This form of thinking is prevalent throughout the evangelical realm in the United States. It has taken too long for the Christian class to speak up about the destruction unfettered capitalism has rendered on the poor, the environment, and the world structure. The beloved pope has blasted the door wide open with his justifiable attack.

The Guardian reports that Pope Francis released his 84 page apostolic exhortation where he states that unfettered capitalism is   “a new tyranny”. He admonishes the wealthy to share their wealth. He makes an important connection for those who profess to abide by the 10 commandments. He uses the ‘Thou shalt not kill’ commandment in an ingenious and practical manner. If you promote an economy that is causing people to die, you are killing. As such you violate that commandment.

The pope illustrated how unfettered capitalism has become more important than humanity itself. He says, “How can it be that it is not a news item when an elderly homeless person dies of exposure, but it is news when the stock market loses two points?”

The pope is calling for a overhaul of the financial system. He acknowledges that the unequal distribution of wealth will inevitably lead to violence. But here is his coup de grace.

“As long as the problems of the poor are not radically resolved by rejecting the absolute autonomy of markets and financial speculation and by attacking the structural causes of inequality, no solution will be found for the world’s problems or, for that matter, to any problems,” he wrote.

Denying this was simple populism, he called for action “beyond a simple welfare mentality” and added: “I beg the Lord to grant us more politicians who are genuinely disturbed by the state of society, the people, the lives of the poor.”

The words of Pope Francis on the current economic system and financial system should not be taken lightly. There is a hum in the air.  Americans must realize that the instability around the world whose genesis has always had an economic component is right at our front door banging. It won’t be long till entry is made.