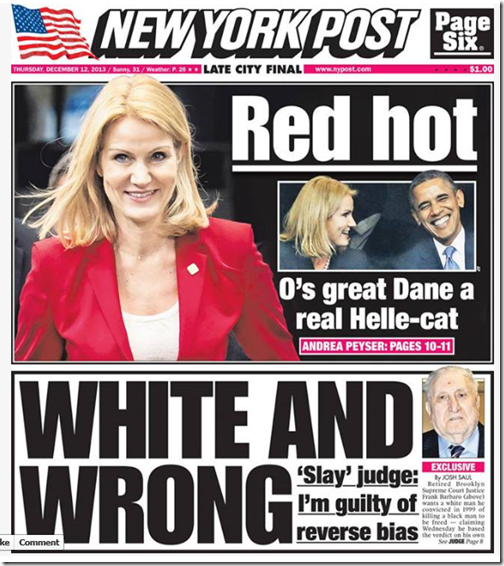 Who would think the madness of President Obama and Michelle Obama’s Mandela memorial attendance would be controversial? It is as if the Right Wing has a dual purpose. Remove the dignity of the occasion to honor a world giant at the same time that it attempts to destroy an American president they despise.

It is never hard to take a photograph of anyone in an unflattering or pensive state that is easily misrepresented. The Obamas and folks of their ilk do not have that right even though it is always afforded to others.

Anyway, suddenly this woman pulled out her mobile phone and took a photo of herself smiling with Cameron and the US president. I captured the scene reflexively. … The atmosphere was totally relaxed – I didn’t see anything shocking in my viewfinder, president of the US or not. We are in Africa. … I later read on social media that Michelle Obama seemed to be rather peeved on seeing the Danish prime minister take the picture. But photos can lie. In reality, just a few seconds earlier the first lady was herself joking with those around her, Cameron and Schmidt included. Her stern look was captured by chance. … At the time, I thought the world leaders were simply acting like human beings, like me and you. I doubt anyone could have remained totally stony faced for the duration of the ceremony, while tens of thousands of people were celebrating in the stadium. For me, the behaviour of these leaders in snapping a selfie seems perfectly natural. I see nothing to complain about, and probably would have done the same in their place.

That characterization of the event from the photographer is likely what most normal people would infer when viewing the photographs and the 'selfie'. The Right Wing would, as they normally do, create an alternate state of reality. They would turn human interactions at a tribute to Mandela into a targeted attack on the President.

Today’s New York Post front page took the 'selfie' event many steps too far. It was a dog whistle. It attempted to play into the false stereo type of black men lusting over white women. It is yet another attempt to create a racial animus towards the president. This time the expectation is to kill two birds with one stone. They want to upset the black community by implying the president disrespected his wife. And they want to upset the white community with the standard racist stereotyping of black men.

The president … lost his morality, his dignity and his mind, using the solemn occasion of Nelson Mandela’s memorial service Tuesday to act like a hormone-ravaged frat boy on a road trip to a strip bar. …  the president flirted, giggled, whispered like a recalcitrant child and made a damn fool of himself at first sight of Denmark’s voluptuously curvy and married prime minister, Helle Thorning-Schmidt. … the Danish hellcat hiked up her skirt to expose long Scandinavian legs covered by nothing more substantial than sheer black stockings. … the president leaned into the air space of the cross-legged Danish cupcake, who is known in Copenhagen as a fan of America’s randy TV show “Sex and the City.’’ It was the memorial equivalent of a bodice-ripper. …  Thorning-Schmidt placed her hands dangerously close to Obama’s side. The president’s cackling head moved inches from the Danish tart’s and yards away from his wife’s. Obama then proceeded to absorb body heat from the Dane, which he won’t be feeling at home for a long time. … Finally, Obama posed for an iPhone selfie with the Danish hottie and British Prime Minister David Cameron. Only after the damaging photo eruption did Obama get hold of himself and regain a dim memory of his marriage vows.

Really? Is that what happened? Of course not. But it sells a lot of papers with the fringe benefit of calcifying the hate for the president for those predisposed to hate him,