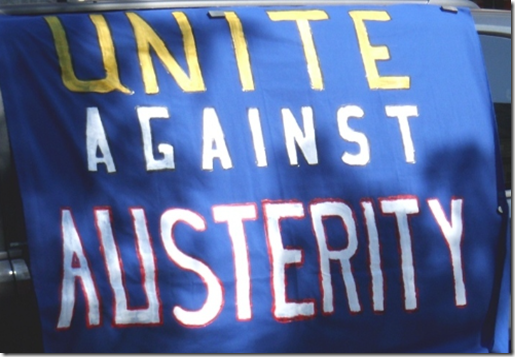 If one listens to the discourse on both sides of the aisle, one would think that there is not ample evidence that austerity is a failure. It is true that austerity is promoted more forcefully by the Republicans. However, the president, the leader of the Democratic Party, has thrown chain CPI on the table to curb social security increases.

What is disconcerting is that all evidence proves that any form of austerity will fail. Moreover the reality of an ever growing transfer of the country’s wealth to the top 2% makes it an immoral and selfish act.

Those supporting austerity have been following the lead of economists Carmen Reinhart and Kenneth Rogoff and their ilk. These hacks were debunked by a 28 year old grad student who found the flaw in their analysis. They did not have their analysis peer reviewed. One can only wonder why. One can only wonder why there was not substantial media coverage which would have stopped austerity talks in its track. Paul Krugman refers to this as the triumph of bad ideas.

From a recent 188-page report by the World Health Organization come these ghastly and appalling factoids:

Joining those doctors in joblessness are 27.6 percent of the entire Greek labor force. By comparison, in the depths of the Great Depression, unemployment in the United States peaked at a lower percentage than that.

These are results following implementation of austerity policies in Greece. If one reads the Paul Ryan’s proposed budget, it would be fool hearted not to believe there would be similar outcomes in America. In fact, America has already implemented a backdoor austerity stance with sequester, government layoffs, and lack of policies to create jobs upgrading the country’s dilapidate infrastructure.

So we cannot properly attribute the catastrophe in Greece to labor protection, nor can we attribute it to government borrowing. What is the cause, then? The World Health Organization has the answer: austerity. "Austerity" is a bloodless term for gross economic mismanagement, animated by heartlessness. That robotic cut-cut-cut mentality that deprives us of jobs, of public services, of safety, of health, of infrastructure, of help for the needy, and -- ultimately -- of our economic equilibrium and the ability to survive. The mentality that ushers in, and welcomes, a vicious war of all against all. Austerity is destroying an entire country, right before our eyes.

Or, as the World Health Organization put it: "These adverse trends in Greece pose a warning to other countries undergoing significant fiscal austerity, including Spain, Ireland and Italy. It also suggests that ways need to be found for cash-strapped governments to consolidate finances without undermining much-needed investments in health."

It is clear why austerity is being pushed. It has nothing to do with solving a problem. Bringing budgets back into balance require two things. Those who benefitted the most from the economic expansion on the backs of the working middle class must pay into the public coffers in the form of taxes to reduce budget deficits. Governments must start investing again in people and infrastructure.

This is not rocket science. This is Economics 101. Most politicians and titans of finance would prefer that these realities are ignored.

Make sure all your identification papers are in order for any new voter suppression laws in your state. Register to vote. Make sure you are still registered to vote 60 days before the election. And by all means, vote your interest in 2014, 2016, and beyond.