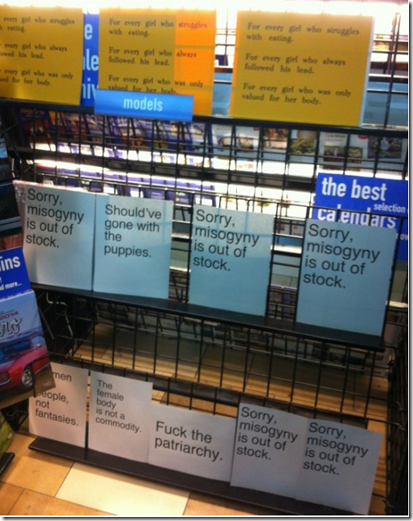 Stealing from stores in the name of Christianity is sad. What is even more sad is that it is being popularized online by a website called Jesus Radical. According to the site, a group of three Christian Anarchists stole all the material they considered ‘sexist and objectifying products’ at a Georgia kiosk and replaced it with ‘placards with anti-sexist rhetoric’. It numbered over 200 items.

How did these Christian Anarchist accomplish their task?

According to the posting at the website they accomplished the feat as follows.

Together, we formulated a plan and decided upon roles that we were all comfortable with: the distraction, the bagger, and the lookout.  The area was scoped out beforehand for cameras, number of employees, and general foot traffic, and escape routes were elaborated.

WSBTV reports that according to the kiosk employee Chris Tott, he never saw when the racy material was stolen. Among the stolen products by the Christian Anarchists were Dallas Cheerleaders and Sports Illustrated calendars.

The kiosk owner Jessica Roy, is upset. She said these thugs chose the wrong target. She said she is just a small business person trying to make a living.

Gwinnett Police told WSBTV that they believe the website poster likely committed the crime. The signs that were left are now in police evidence. The problem is that there is not much forensics as the Christian Anarchists modus operandi as indicated by the post is to wear gloves among other efforts to enter and leave the crime scene undetected. The owner of the website with the post says they have no clue as to the perpetrators of the crime.

There are two things this story brings to mind. They are both telling.

Many groups are doing bad thing in the name of Christianity. In doing so without rebuke from many evangelical groups, it starts to become the norm. One need only remember the brutal assassination of Dr. George Tiller and the reprehensible shenanigans of Westboro Baptist Church..

One wonders if these Christian Anarchists were able to complete their thievery because of stereotyping. Their effort took some time. They had to be left alone for several minutes. If they were three Black or Latino people, it is likely they would have been followed and profiled like many Black and Latino people are in many stores. That would present the perfect narrative to the failure of profiling.

One can only hope that evangelicals will become more responsible. One hopes that they will begin to speak out against the acts of many of their factions. One hopes they will remember the real teachings of Jesus, the New Testament, and the Old Testament.