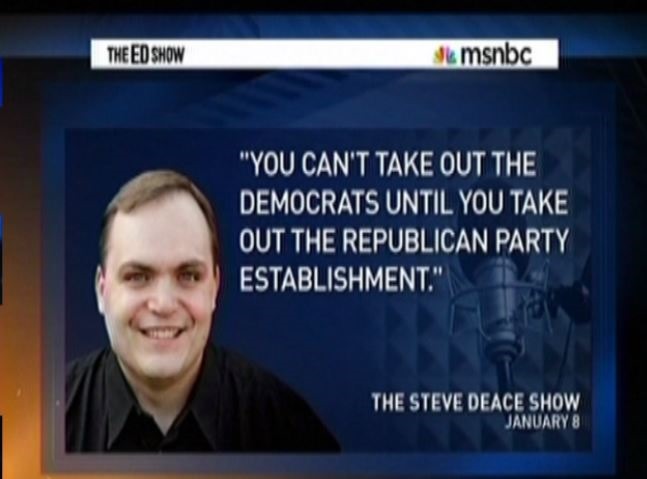 Everyone knew it would not be long for the Right Wing to come out. They smell blood. They know that inasmuch as they failed when they shutdown the government, something would occur to revive them. They intend to take back the mantel from Chris Christie, the façade of Republican moderation.

Anyone listening to Right Wing talk radio can already hear the spin. They have begun the indoctrination of their base to ensure negative feelings against Chris Christie.

“Conservatives need to run from Chris Christie,” said Glenn Beck. “This again is the quintessential example of why I am against him. … Here is the good news. I think this just ended his political career for president.”

Steve Deace’s commentary seem to corroborate the description provided about him at his show’s website. Could he really be proud of his ignorance?

Steve Deace barely made it out of community college in one piece, and then loosely attended a real college for a while.
We say he only attended because there’s no record of him actually accomplishing anything while he was there, or at least anything he wants to tell his three children about before they’re 21 years old. By the grace of God he managed to find a woman that would put up with him, his wife Amy who daily exhibits the patience of Job. Because he’s not that educated, Deace actually believes the Bible is literally true and the Constitution isn’t a living, breathing document. He also knows way more about superheroes, Star Wars & Star Trek, and college football than any man not living under a vow of perpetual virginity in his mom’s basement should.

What is obvious is that there are not many Republicans coming out to vigorously defend Chris Christie. He seem somewhat on his own deservedly. It is likely very few Republicans have forgiving him for excoriating the Republican Congress and John Boehner by name.