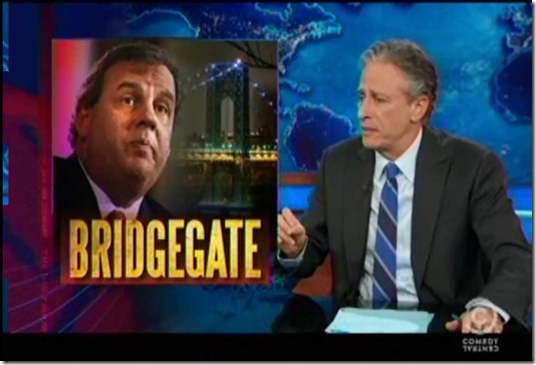 The Chris Christie gravy train keeps on giving. Chris Christie said the following in his marathon press conference a few days ago gave the impression that his contact with David Weinstein was at best sparse. David Wildstein is the Chris Christie appointee that arranged the closure of local lane leading to the George Washington Bridge.

“I have had no contact with David Wildstein in a long time, a long time, well before the election,” said Chris Christie. “You know, I could probably count on one hand the number of conversations I’ve had with David since he worked at the Port Authority. I did not interact with David.”

The Wall Street Journal is reporting that a picture has surfaced showing Chris Christie with David Wildstein together on September 11th, 2013. This was during the height of the lane closures.

How likely is it that Chris Christie did not discuss this with both David Wildstein and David Samson, the Port Authority chairman who was also present? By then mayors and other local officials were hyperventilating for the traffic snarl.

Chris Christie’s Bridgegate cover-up is falling apart. When the comparisons of Bridgegate and Watergate begin, you are in trouble. Jon Stewart pretty much broke it down even if he came to the conclusion accidentally.

“Does every scandal have to get a gate?” Asked Jon Stewart. “Watergate was a completely different animal. It was a petty crime of political intrigue by an incumbent already cruising to an easy reelection victory. It was an unforced error where the cover-up was actually more damaging…”

Jon Stewart had to pause as he detected the very real similarity as the audience laughed at his ‘accidental realization.’ So, he changed to another hopeful dissimilarity.

“I mean this is no Watergate,” Jon Stewart said. “This is about b. …” Again when he sees the picture of the George Washington Bridge over water, he knew he needed to move on.

Jon Stewart is one of many coming to the conclusion that this scandal has imprints of Nixon’s Wategate. In fact even Conservative columnist and pundit George Will said as much. See that video snippet here.