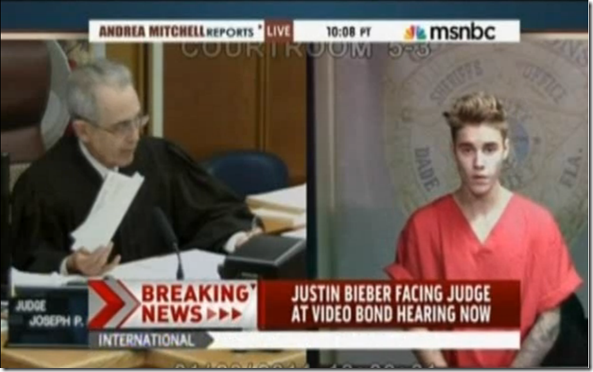 Pop star Justin Bieber is facing driving under the influence and other charges after authorities said he raced through a Miami Beach neighborhood in a rented Lamborghini, cursed at cops as he resisted arrest and admitted to consuming drugs and alcohol.

Bieber wore an orange prison outfit for his first appearance in bond court Thursday afternoon, where Judge Joseph P. Farina ordered him held on $2,500 bond. He has been charged with DUI, resisting arrest and driving with a suspended license.

He posted bond and was released about an hour after his court appearance. As Bieber left the Miami-Dade Jail, he got on top of an SUV and waved to the crowd.

His motorcade drove around Miami-Dade for two hours before arriving at the Icon Brickell tower in Miami.

Justin Bieber’s first order of business after being released from jail? Getting on top of an Escalade, natch. pic.twitter.com/rqnrujrVVN