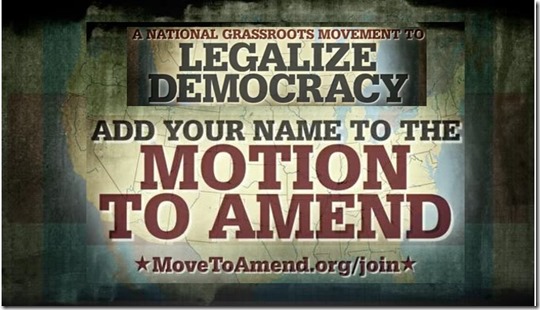 January 21st, 2014 was the 4th anniversary of the infamous Citizens United Supreme Court case. Citizens United is the case that opened the door much wider for corporations and the wealthy to take away our Democracy.

Move To Amend was featured with two hours of programming on Free Speech TV on Tuesday, this Citizens United anniversary. For those that missed it, the four segments are provided below. Anyone who is interested in preserving our democracy must watch. Consider purchasing the entire DVD which includes many additional voices and outtakes. Please order here.

Legalize Democracy is a 30 minute documentary about Move to Amend. It is fast-paced and action-oriented. This DVD is a great tool for folks looking to get involved in Move to Amend or similar grassroots movements to help spread the word about what is ailing our democracy.

Legalize Democracy is both entertaining and informational. It leads you through the paths and constant struggles of maintaining our rights. Most importantly it does so using an approach that grabs the attention. It makes it visible in no uncertain terms why this movement is necessary. Whether you are a political being or an apolitical being, you will get a whole lot out of this documentary.

The cost for the DVD is on a sliding scale. You determine what you can pay ($10-25).  Order your copy here. Additional funds will be used to help underwrite Move to Amend’s grassroots organizing work.

Legalize Democracy was produced by Move to Amend. It was directed by Dennis Trainor, Jr., and financed by grassroots donations. Help spread the word by hosting a house party to support Move to Amend and show the film. Details about hosting a party are here: https://movetoamend.org/houseparty.

Dennis Trainor: We Need A Democracy Movement To Fix This Shit