It seems like I chose just about the right time to write an article on Wendy Davis. She finds herself under attack not only by the entire Right Wing establishment, but from the traditional media as well. She happens to be the story to balance the myriad of bad acts by Republicans. There is a concerted and organized social media attack in effect.

Unfortunately one wonders if her team is up to the task as for all practical purposes the attack has been left unanswered. When one examines the Right Wing websites both known and independents, the coordination is evident. No such coordination is seen on the Democratic side.

The Wendy Davis team like many other Democrats in pseudo Conservative states may fear organizing Democratic leaning sites for fear of being tagged Liberal. They do that at their peril. The only real Democratic presence online of consequence is the Democratic Wing of the Democratic Party. Until they are engaged effectively, the winning margin is mathematically unattainable. You want them to vote, engage.

The following is an excerpt from my article.

Texas State Senator & Gubernatorial Candidate Wendy Davis was interviewed by Maria Shriver on NBC. Maria Shriver did a great job taking America and specifically Texans through the Wendy Davis story. Specifically she covered her ascent from living as a single mother in poverty in a trailer park to a Harvard scholar and ultimately a star in politics who remembers where she came from.

Wendy Davis took Maria Shriver to the trailer park where she lived and had a prescient statement. “I tried really hard not to put this in the rearview mirror,” Wendy Davis said. “I’ve tried to keep it present.”

A politician who has lived in poverty and hard times can empathize with those she governs. A politician who had to use public service at times to get a hand up to be self-sufficient and a net benefit to society understands the policies that have material effects on the lives of the middle class and the poor.

Maria Shriver asked Wendy Davis if she felt she was living in poverty during her difficult years. Her answer was the answer many Americans and Texans could have recited.

“I knew I was poor because of the struggles that I and my young daughter Amber were experiencing,” Wendy Davis said. “I was having a really hard time making ends meet, paying for my child care, a car payment, and making sure I kept the lights turned on sometimes didn’t happen.”

View PDF of the article here. 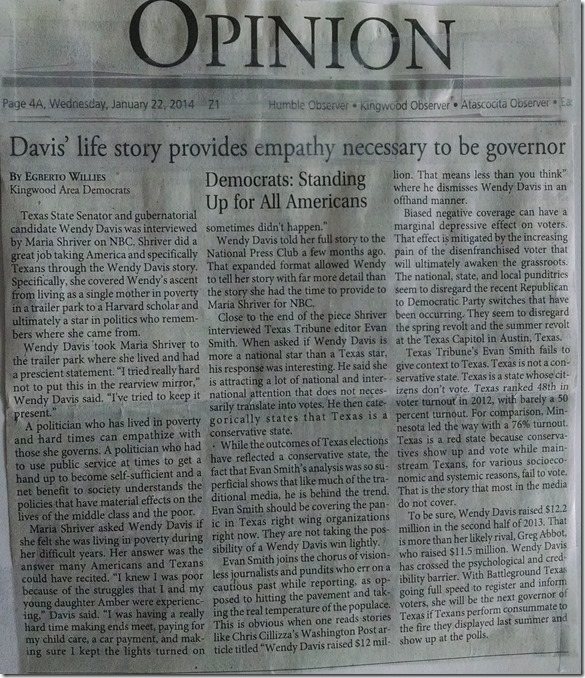