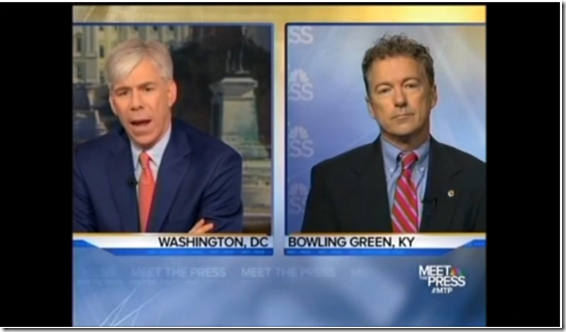 Rand Paul injected Bill Clinton’s ‘predatory behavior’ on Monica Lewinsky into the election on NBC’s Meet The Press with David Gregory. It came about after David Gregory read a quote by Kelly Ashby, Rand Paul’s wife to Vogue Magazine. She Bill Clinton’s relationship with Monica Lewinsky would complicate his return to the White House even as First Spouse. “I would say his behavior was predatory, offensive to women,” she said.

Did President Clinton support policies good for women? Did the Bill Clinton have women well represented in his administration? The answer to all those questions is yes.

The issue however is not that. Democrats, specifically Progressives have been pushing the fact based message that there is a war on women by the Right. This argument is based on policies that affect women’s health, financial well-being, and economic upward mobility. If the Monica Lewinsky scandal is brought into the debate it runs the risk of muddling the message.

This is not a 2016 issue. It is a 2014 issue. Going forward, it is likely that a fickle and shallow traditional media will make an issue of this as more on the Right bring up that infamous name, Monica Lewinsky. Unfortunately, real women’s issues will take a back seat to the salacious hyperbole that is the Bill Clinton Monica Lewinsky scandal reborn.

This may be a clear reason to bring in fresh blood. This may be a time where a populist like Senator Elizabeth Warren who does not have the baggage of Hillary Clinton to join the presidential fold. Hillary Clinton was one of the victims of the Monica Lewinsky scandal. It would be sad if that becomes the reason for her not running. It would be worse if a necessary Progressive agenda to save the poor and the working middle class is put on hold.