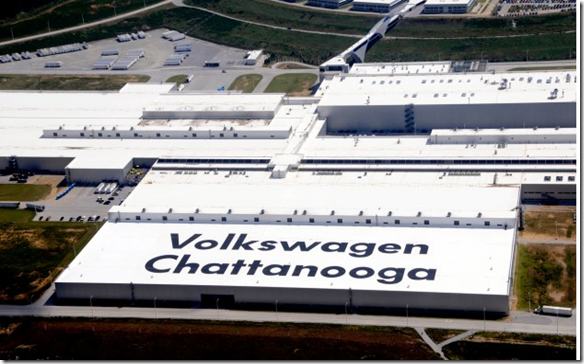 VW and its employees both supported the formation of a union at their Chattanooga Tennessee factory. The German company believes in work councils where management and rank & file alike work to make a better working environment and a better product. Tennessee Republicans in a panic worried that the plant would unionize. They resorted to concerted lies and misinformation. Senator Bob Corker said the following.

“I’ve had conversations today and based on those am assured that should the workers vote against the UAW, Volkswagen will announce in the coming weeks that it will manufacture its new mid-size SUV here in Chattanooga,” said [Sen. Bob] Corker, without saying with whom he had the conversations.

That statement from Corker seemed to be a lie. According to Reuters,

In the past few weeks, Volkswagen officials have made several statements that the vote will have no bearing on whether the SUV will be made at the Chattanooga plant or at a plant in Puebla, Mexico.

The sabotage went much further however. According to KNOX News

Republican lawmakers in Tennessee on Monday threatened that the state could turn off the spigot of incentives for Volkswagen if workers at the German automaker’s plant decide this week to approve union representation. State Senate Speaker Pro Tem Bo Watson in a news conference in Chattanooga called the United Auto Workers campaign at the plant “un-American.” “Should the workers at Volkswagen choose to be represented by the United Auto Workers, any additional incentives from the citizens of the state of Tennessee for expansion or otherwise will have a very tough time passing the Tennessee Senate,” he said.

Is this not government interference into the business of a private corporation? Is this not a government threat against the well being of the middle class worker? It definitely is. Ultimately the threat worked. Unionization of the plant was defeated. According to the Washington Post,

The loss came in spite of an unprecedented level of support from the company being organized. Frank Fischer, CEO and chairman of Volkswagen Chattanooga — who hadencouraged the idea of starting a German-style “works council” at the plant, like those in place at Volkswagen’s other factories — even seemed saddened by the outcome.

The UAW reacted as follows.

“Unfortunately, politically motivated third parties threatened the economic future of this facility and the opportunity for workers to create a successful operating model that would grow jobs in Tennessee,” UAW Southern Region organizer Gary Casteel said.