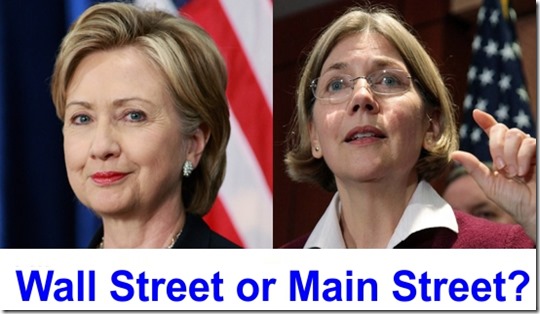 After listening to Krystal Ball’s well-spoken justification, it is hard not to agree. She said the following.

It’s clear now that we have two economies, one for a thin slice of educated elites, and one for everyone else. That is this moment. So I ask you. Does Hillary Clinton sound to you like the right person for this moment?

In a time when corporations have hijacked our politics, enabling them to reap all the profit without feeling any compunction to do right by their workers; Is someone who sat on the rabidly anti-union board of Walmart for six years the right person to restore workers’ rights? In a time when we are still reeling from a global financial disaster brought on by fool hearted bank deregulation; Is someone who took $400,000 to give two speeches at Goldman Sachs the person we need to wrest control of the asylum back from the banking inmates? Someone who at those paid speeches reassured the masters of the universe in attendance that they were unfairly being persecuted? That in her words, “banker-bashing … was unproductive and indeed foolish?” Someone whose husband by the way did much of the deregulating that got us into trouble in the first place?

The problem isn’t that Hillary Clinton received $400,000 for two speeches. It would be naïve to believe that politicians or most would not capitalize on the power to earn off of their stature. The problem is that that extraordinary sum came from Goldman Sachs. Are they hedging their bets?

While Krystal Ball found Hillary Clinton’s statement from the Politico’s piece “Lament of the Plutocrats” disconcerting, it is the sentiment one gets from the titans of finance that should worry us all. The following snippets are probative.

But a shift back to Wall Street’s historic Republican roots is by no means a given, especially if the Democratic nominee is local favorite Hillary Clinton—and the former New York senator has been shrewdly tending to would-be donors for much of the last year, whether in the form of speaking engagements like the one at Goldman this fall, or by glad-handing as she helps to raise $250 million for her family’s foundation. …

The worry on Wall Street is about how far to the left Clinton might have to drift to appease what’s been proclaimed the “Warren wing of the Democratic Party”—the vocal populists buoyed by Elizabeth Warren’s tough critiques of Wall Street greed, as well as by the recent election of liberal Mayor Bill de Blasio on their New York home turf. …

Still, some say fears that Clinton will end up alienating financial sector donors the way Obama has, even if she tacks left, are overblown. “Wall Street folks are so happy about [having Clinton run] that they won’t care what she says,” says one well-placed Democrat.

Support for policies that maintain the status quo in the financial sector is anathema to everything today’s Liberals and Progressives are fighting for. It is anathema to the well-being of the working poor and the working middle class.

Americans are becoming aware that they have been had by the plutocracy. At some point in time, they will stop voting against their interest. Senator Elizabeth Warren or someone like her who has the ability to connect the opportunity of free enterprise with civic duty and responsibility is what America needs at this time.

Should Hillary Clinton be the Democratic nominee?

If Hillary Clinton is the Democratic nominee, as a Democrat it would be better than any Republican getting elected. A populist Republican with limited Wall Street ties, with a fairly liberal social stance on marijuana, marriage equality, immigration reform, incarceration (mandatory minimums), and women’s rights is out there waiting. Anyone following the news can see that Republican in the making.