MSNBC’s Krystal Ball gave a compelling case against Hillary Clinton running for the presidency. As a supporter of Hillary Clinton over Barack Obama, it was evident her conclusion pained her.

“Back in 2008, when all my peers were jumping on the Obama bandwagon, I backed Hillary,” Krystal Ball said. “The country was reeling from a disastrous eight years of President George W. Bush.”

Krystal Ball’s most damning statement about a Hillary Clinton run is rather devastating.

It’s clear now that we have two economies. One for a thin slice of educated elites. And one for everyone else. That is this moment. So I ask you. Does Hillary Clinton sound to you like the right person for this moment? In a time when corporations have hijacked our politics, enabling them to reap all the profit without feeling any compunction to do right by their workers; Is someone who sat on the rabidly anti-union board of Walmart for six years the right person to restore workers’ rights? In a time when we are still reeling from a global financial disaster brought on by fool hearted bank deregulation; Is someone who took $400,000 to give two speeches at Goldman Sachs the person we need to wrest control of the asylum back from the banking inmates? Someone who at those paid speeches reassured the masters of the universe in attendance that they were unfairly being persecuted? That in her words, “banker-bashing … was unproductive and indeed foolish?” Someone whose husband by the way did much of the deregulating that got us into trouble in the first place? 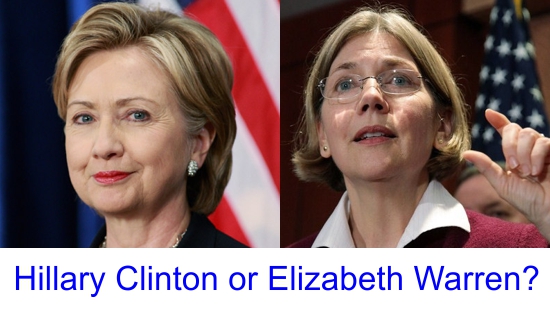 A Libertarian Republican like Rand Paul could justifiably run an appealing populist message against Hillary Clinton. That message would take hold especially with the current state of the working poor and the working middle class.

Krystal Ball like many other Liberals and Progressives believe that America is waiting for an unapologetic champion of the working poor and the working middle class. She is right. Elizabeth Warren fits that bill. Listen to her here, here, and here.

Many supporters of Hillary Clinton will likely call foul. After-all, is it not her time? The presidency is owed to no one. Moreover, Hillary Clinton’s continued chumminess with the Plutocracy justifiably gives many pause. For those who believe a populist message cannot win, they must think again. As Americans feel the pinch of reality, populism does not seem so radical.