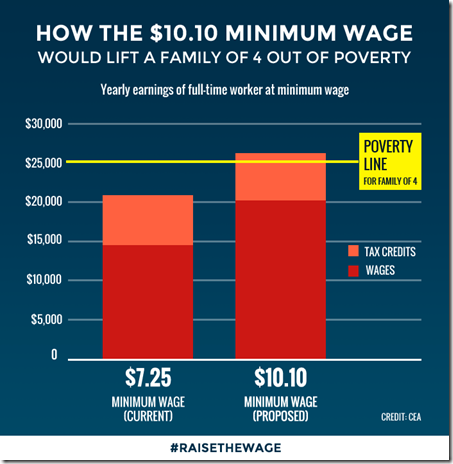 Many economists are flabbergasted because all the best scholarship on minimum wage shows it does not cost jobs. The CBO provided absolutely no new analysis to refute that.

The reality is that the CBO report is overwhelmingly positive on the impacts of raising the minimum wage. 25 million Americans would receive more pay. This will lift almost a million Americans out of poverty. In an attempt at balance which false equivalences tend to skew, the CBO thought that crediting a debunked myth of potential job losses would make it seem more balanced.

This morning there was a very good discussion on the minimum wage on MSNBC with Demos’ Bob Herbert. He had two very important statements about the minimum wage and job losses that should be heeded.

“I have been hearing this all of my adult life,” Bob Herbert said. “Every time they have raised the minimum wage, nothing catastrophic has happened. That has never occurred. And not only that, we tend to forget that the minimum wage use to be worth, it actually was higher because it use to worth more than it is now. It’s been eroded by inflation. … There is plenty of room for the minimum wage to be raised in this country.”

Near the end he made the most important statement.

“It seems to me that if you can’t afford to pay your workers a reasonable wage,” Bob Herbert said. “You can’t afford to be in business. How is a wage any different for example like your overhead, your rent, than what you have to pay for supplies, and that sort of thing? The idea that workers should subsidize the profits of corporations I think is just silly. Pay workers a reasonable wage.”

Here are some noteworthy facts relative to the minimum wage.