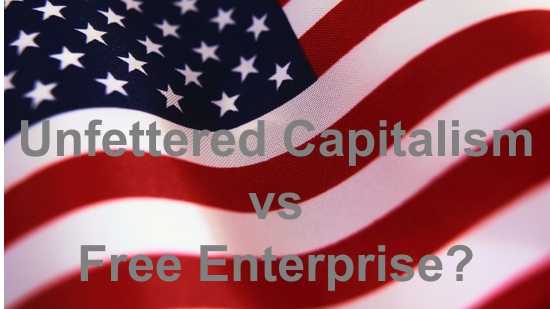 David Brooks New York Times piece “Capitalism for the Masses” is a blood boiler. Macroeconomic math is very simple. There is one mathematical fact. If the wealth of the rich is growing at a consistently higher rate than the rate of the economy’s aggregate wealth creation and that rate differential is not completely attributable to sources external to the US, then wealth is being transferred from the poor and the middle class to the rich.

If one listens to CNBC or reads the Wall Street Journal, the only thing that matters is growth. They want unfettered capitalism. Is that what we want? Is capitalism of this form right?

If a company does not meet growth expectations, its stock is clobbered. When a company has exhausted its growth potential because of product saturation and the inability to expand to other markets a semblance of continued growth is usually attained on the backs of the workers in the form of lower wages, lower benefits, etc. When that cycle is complete, stock collapse followed by either acquisition or some sort of liquidation is likely.

David Brooks’s article was sort of an ode to the President of the American Enterprise Institute, Arthur Brooks. Arthur Brooks and David Brooks are not related. David Brooks was enamored with Arthur Brooks‘s rather long essay titled “’Be Open-Handed Toward Your Brothers.” He intimates that Arthur Brooks is providing tough love to conservatives by suggesting they declare a truce on the social safety net. Yet, the tone and ideology of his essay is still based on pointless fallacies.

The 2008 election marked the return of progressive politics in America. For the first time in 16 years, Democrats won both houses of Congress and the White House. They wasted no time in articulating a progressive agenda they claimed would offset the Great Recession and turn America toward greater fairness and compassion. Lifting up the poor, decreasing inequality, and curbing runaway income gains among the wealthiest Americans ranked high among their stated priorities.

While Democrats took over, the agenda was far from progressive. The stimulus was balanced and tax cuts remained. Inasmuch as the Affordable Care Act was better than the old system, it was a conservative plan. Banks remained private and the ‘capitalists’ that destroyed the economy were bailed out.

In sum, the administration’s ostensibly pro-poor, tough-on-the-wealthy agenda has led us toward a new American Gilded Age. Our putatively progressive president has inadvertently executed a plutocratic tour de force.

This new American Gilded Age is a function of entrenched economic policy that neither, the president, republicans, nor democrats are interested or willing to address. Only an economic paradigm shift can ultimately solve the steady decline of the poor and middle class in the country. It is basic math.

David Brooks pointed out the perfect example though he came to the wrong conclusion.

But now capitalism faces its greatest moral crisis since the Great Depression. The nature of that crisis can be captured in two statistics. When Facebook entered a deal to buy WhatsApp this week, it agreed to pay a price equal to $345 million per WhatsApp employee. Meanwhile, the share of the economic pie for the middle 60 percent of earners nationally has fallen from 53 percent to 45 percent since 1970

American taxpayers built the Internet. Thousands of marginally paid scientists and engineers designed the chips that allowed other engineers to build computers and servers necessary to support Facebook and WhatsApp. Millions of users provided the community that is Facebook/WhatApps. Yet our form of capitalism allows a few to profit from what was really created by the masses and managed by a few. This story is replicated throughout the economy.

In a fair system, that $19 billion that was paid by capitalists to purchase WhatsApp would take into account the relative value of all those that made Facebook and WhataApp a success. This applies to the masses today. We pay tolls to keep up the roads. We pay taxes to maintain our infrastructure, our military, and our research.

To be specific, some services and products should be considered utilities. All utilities should have a non-profit component. Banking (e.g., Bank of North Dakota), water, fuel, electricity, and health insurance (single payer or public option) should at the minimum have non-profit components to compete with for -profits.

Our form of capitalism will kill our democracy.

America’s current form of capitalism kills free enterprise, kills democracy. Real progressive policies ensure that policies are biased towards people as opposed to corporations. They create a more even playing field, a playing field where real free enterprise by the masses will strive.