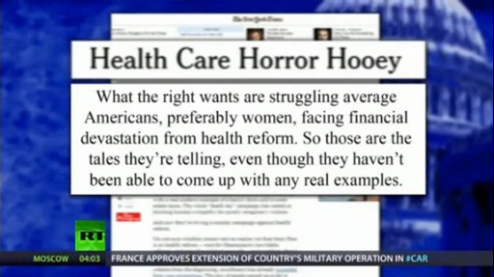 Julie Boonstra’s monthly bill went from $1,100 per month to $571 per month, a savings of $6,348 per year. Her absolute maximum out of pocket cost including deductible is $6,350. Americans For Progress admits that unlike what she said in the ad, her doctor is on the Blue Cross Blue Shield plan she is privy to. Unlike all policies pre-Obamacare, her current policy cannot be rescinded and there is no cap. In other words, her costs are known and she cannot be bankrupted by medical bills.

Julie Boonstra was subsequently featured on Fox News, America’s bastion of misinformation. Steve Doocy was caught off guard. He believed her new rate was $1,100 and not $571. He had the opportunity to tell his listening audience that the savings from her current insurance rate was equivalent to her current deductible with the additional benefit of a secure policy. Sadly, that would have been journalism, something neither Fox News nor most traditional media are practicing any longer. This one broadcast of misinformation likely inoculated thousands from the ability to readily process truths about Obamacare.

Most people are not analytical. They depend on external assistance in order to make up their minds when coming into new ideas. They generally trust their leaders as people in positions of authority. They do not expect complete honesty. But neither do they expect blatant and continuous lying as a possibility.

While the Democratic wing of the Democratic Party was fighting with corporate Democrats to salvage as progressive a plan possible within a conservative healthcare reform bill, Republicans were busy demonizing the plan. Death panels, government takeover of healthcare, and throwing grandma over the cliff were the prevailing messages from Republican politicians. A derelict corporatist traditional media gave these messages a semblance of veracity. It is difficult then to put all the blame on the average American citizen for their ignorance.

Brian Beutler wrote a Salon piece worth reading titled “The right’s sociopathic new scam: Using Americans to harm their own health plans.” He acknowledged that Republicans continue to promote false horror stories after false horror stories that are all summarily debunked by a “handful of diligent reporters”.

Politicians must do this as well. The problem is that in doing so they find themselves in a no win situation. If they challenge a constituent they are implicitly telling their constituents that another constituent is telling lies. This is then spun by the Right as a politician intimidating a constituent. As the Salon piece points out, Rep. Gary Peters (D-MI) found that out when his lawyer challenged the TV stations playing the Julie Boonstra ads with a plethora of lies.

Brian Beutler provides what is in fact an irony.

But of course, we’re really just talking about Julie Boonstra here. If she and AFP get their way, she’ll be just as much a victim of Obamacare repeal as all the people who face health circumstances similar to hers. And the saddest part of that tragic irony is that Boonstra doesn’t even seem to understand what her circumstances are, or why it doesn’t make sense to devote her energies to repealing the law. Boonstra told the Dexter Leader, “People are asking me for the numbers and I don’t know those answers — that’s the heartbreak of all of this. It’s the uncertainty of not having those numbers that I have an issue with, because I always knew what I was paying and now I don’t, and I haven’t gone through the tests or seen my specialist yet.”

Opponents of Obamacare seeking repeal and using fallacies to mislead Americans into supporting repeal can only be considered sociopaths. They are knowingly asking American to be ‘a weapon in a war against themselves’.

What Republicans, the Right, Conservatives, and their friends are doing unbeknownst to them could be fatal for them if successful. If successful, there will be real stories of people losing their healthcare, losing something they had, and losing financial security they may no realized they had.