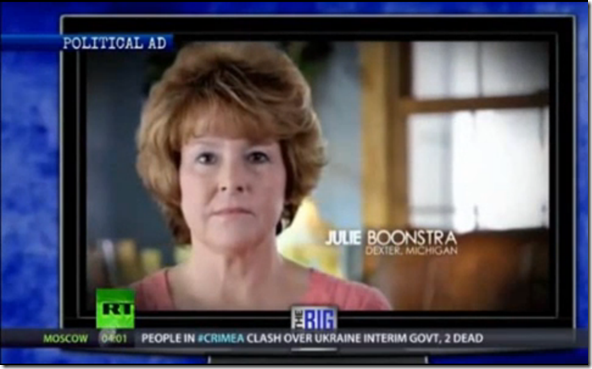 Because the Koch Brothers have been unable to find people in real need for affordable insurance where Obamacare was a net negative, they had to resort to lies. Debunkers have been playing Whac-A-Mole with every single false ad, Fox News false story, and or lying politicians.

The Julie Boonstra story almost brought me to tears because it’s a real story. Her story is personal to me because I have a wife with Lupus, a pre-existing condition. We were fortunate to always have insurance. Check out our own Obamacare story here.  My wife is the leader of a Lupus group in our area with women and men who suffer with the disease who were unable to get or afford health insurance. Julie Boonstra has leukemia, a disease that can be fatal.

Julie Boonstra’s ad was proven to be not only misleading but a mathematical lie. It is sad that people who know better, specifically the Koch Brothers funded Americans for Prosperity (AFP), have misled Julie Boonstra and potentially Americans watching the ad.

Here is the truth about Julie Boonstra Obamacare reality.

Harry Reid lashed out at the Koch Brothers on the Senate floor.

My wife’s cancellation letter from her high priced low service old health insurance policy was a blessing. Only those with sociopathic instincts can make a positive occurrence a negative that could ultimately kill Americans,

This ad will hurt Americans who believe the lies if it prevents them from getting Obamacare. Worse, if it is believed and encourages politicians to weaken the law, it hurts us all. Obamacare needs fixing. It would serve the country best if it morphed into Medicare For All.