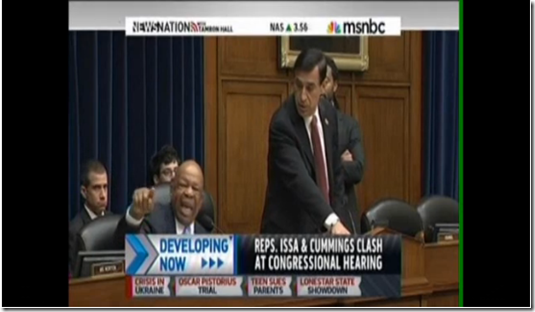 In a very uncivil move, House Oversight Committee Chairman Darrell Issa (R-CA) cut off the microphone of ranking Democrat on the Committee, Rep. Elijah Cummings (D-MD). This occurred on one of Darrell Issa’s politically inspired witch hunts. In this case it is the IRS faux scandal.

The IRS faux scandal involved the supposed targeting of conservative groups seeking 501(C4) status. It turned out that liberal groups were targeted as well.

“For the past year, the central Republican accusation,” Rep. Elijah Cummings said just before his microphone was cut. “This investigation has been a political collusion directed against the White House.”  When Rep. Darrell Issa got up to leave, Rep. Elijah Cummings exploded.

“If you would sit down and allow me to ask a question,” Rep Elijah Cummings said. “I am a member of the Congress of the United States of America. I am tired of this. We have members over here each who [sic] represents seven hundred thousand people. You cannot just have a one sided investigation. There is absolutely something wrong with that and it’s absolutely un-American.

In an interview afterwards Rep. Darrell Issa claimed that there was nothing political about the hearing. He also claimed he did not allow Rep. Elijah Cummings to speak because he wanted to make a speech. Really? Is that not what Darrell Issa spend most of the time doing while investigating faux scandals like this one? Rep Elijah Cummings said that he and his members come to seek the truth. He said it is very important that Congress ensures government is operating correctly.

Journalists were surprised that Rep. Darrell Issa would take such a divisive step. One said, “I am not sure cutting off the microphone of the Democrat, the ranking Democrat on the committee actually helps you make that case that this has nothing to do with politics.

Darrell Issa cuts off the microphone of Rep. Elijah Cummings