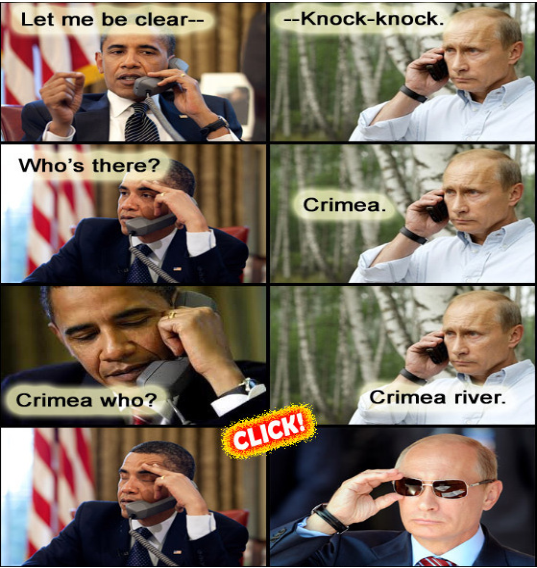 I received the following meme from several of my Right Wing friends today. I love the back and forth between my Conservative and Right Wing friends. We generally have fun with each other. While I tend to frequent both their sources of information (Fox News, Rush Limbaugh, and paid Koch trolls) as well as other traditional sources, I find it astounding what is occurring.

I really do not mind having fun with the big government small government debate. I don’t even mind when they call me the Pinko Liberal. In the abstract it does not hurt, kill, or maim.

The Right Wing dialogue about the Obama/Putin feud is disconcerting on many levels. It is sad. It is not only unseemly, disloyal, and unpatriotic, it is outright dangerous. When one’s hate for one man supersedes national security it puts much into question. Over the last few weeks Fox News characters have been exalting Putin’s fortitude versus President Obama’s mom jeans wearing lack of potency. Worse was Rudy Giuliani’s praise of Putin for irresponsible ill-planned behaviors.

Giuliani: But he makes a decision and he executes it, quickly. Then everybody reacts. That’s what you call a leader. President Obama, he’s got to think about it. He’s got to go over it again. He’s got to talk to more people about it.

A Move To Amend colleague sent me Robert Parry’s latest article on the Ukraine debacle. It is a very complex issue that most Americans will never see via the traditional media owned by the corporatocracy. Robert Parry is the AP reporter that broke the Iran-Contra scandal. He got so fed up with a lousy press that he started Consortiumnews.com to provide real journalism untainted by the corporate masters.

In his long article from a few days ago titled “What Neocons Want from Ukraine Crisis” he explains in detail the machinations surrounding the Ukraine crisis. It bears very little resemblance to what is being reported by the lightweights in the traditional media and the misinformation from the Right Wing media.

Robert Parry reports that the election of President Obama threw a wrench into the plans of the neocons.

The neocons were dealt another setback in 2008 when Barack Obama defeated a neocon favorite, Sen. John McCain. But Obama then made one of the fateful decisions of his presidency, deciding to staff key foreign-policy positions with “a team of rivals,” i.e. keeping Republican operative Robert Gates at the Defense Department and recruiting Hillary Clinton, a neocon-lite, to head the State Department.

While the neocons were hyperventilating about Obama’s weakness, the president had a two tiered foreign policy. One was visible and the other was a special relationship with Putin that actually showed results.

Though I’m told the Ukraine crisis caught Obama and Putin by surprise, the neocon determination to drive a wedge between the two leaders has been apparent for months, especially after Putin brokered a deal to head off U.S. military strikes against Syria last summer and helped get Iran to negotiate concessions on its nuclear program, both moves upsetting the neocons who had favored heightened confrontations.

Obama’s unorthodox foreign policy – essentially working in tandem with the Russian president and sometimes at odds with his own foreign policy bureaucracy – has forced Obama into faux outrage when he’s faced with some perceived affront from Russia, such as its agreement to give temporary asylum to National Security Agency whistleblower Edward Snowden.

The praise for Putin now is nothing but a means to create a policy wedge.

If not for Putin, the neocons – along with Israel and Saudi Arabia – had hoped that Obama would launch military strikes on Syria and Iran that could open the door to more “regime change” across the Middle East, a dream at the center of neocon geopolitical strategy since the 1990s. This neocon strategy took shape after the display of U.S. high-tech warfare against Iraq in 1991 and the collapse of the Soviet Union later that year. U.S. neocons began believing in a new paradigm of a uni-polar world where U.S. edicts were law.

The neocons felt this paradigm shift also meant that Israel would no longer need to put up with frustrating negotiations with the Palestinians. Rather than haggling over a two-state solution, U.S. neocons simply pressed for “regime change” in hostile Muslim countries that were assisting the Palestinians or Lebanon’s Hezbollah.

What every American should be aware of is the part Ukraine plays in the puzzle. They should also be aware how the tentacles of the neocon portion of the American and European plutocracy is causal as opposed to just an organic populous movement.

The neocons came to recognize that the Obama-Putin tandem had become a major impediment to their strategic vision.

Without doubt, the neocons’ most dramatic – and potentially most dangerous – counter-move has been Ukraine, where they have lent their political and financial support to opposition forces who sought to break Ukraine away from its Russian neighbor.

Though this crisis also stems from the historical division of Ukraine – between its more European-oriented west and the Russian-ethnic east and south – neocon operatives, with financing from the U.S.-funded National Endowment for Democracy and other U.S. sources, played key roles in destabilizing and overthrowing the democratically elected president.

NED, a $100 million-a-year agency created by the Reagan administration in 1983 to promote political action and psychological warfare against targeted states, lists 65 projects that it supports financially inside Ukraine, including training activists, supporting “journalists” and promoting business groups, effectively creating a full-service structure primed and ready to destabilize a government in the name of promoting “democracy.”

So what is the ultimate goal of the neocons with this Ukraine crisis?

At minimum, the neocons hope that they can neutralize Putin as Obama’s ally in trying to tamp down tensions with Syria and Iran – and thus put American military strikes against those two countries back under active consideration.

Read the entire article and contrast it with the news one sees on traditional media. It will be immediately apparent that just like Americans were played on the lead up to the War in Iraq, they are being played in the Ukrainian crisis. The big difference is that the stakes are much higher. Russia is no Iraq. Russia is strong. Russia has nukes.