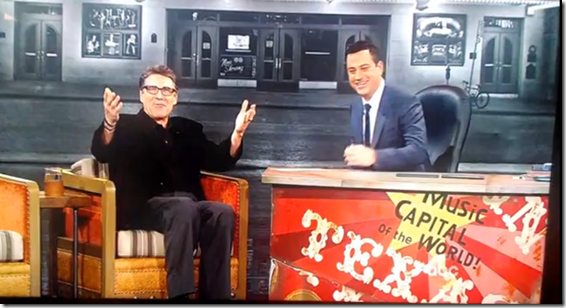 Jimmy Kimmel is doing his show at the South by Southwest (SXSW) conference in Austin Texas. Tonight his special guest was none other than Texas Governor Rick Perry. Jimmy Kimmel gave him a great introduction.

“He is the longest serving governor in the history of this state,” Jimmy Kimmel said. “He lives in a very old house right down the block from here. He comes directly from the trip hop tent at South by Southwest tonight. Please welcome Governor Rick Perry.”

The audience started clapping as they do for the introduction of every guest. However, when Governor Rick Perry began to sit down, the ‘boos’ started. After Jimmy Kimmel said he did not know what was going on, Perry started off with a joke.

“There is [sic] three places you wanna make sure you don’t wanna be introduced if you are in the business I am in,” Rick Perry said. “a hockey match, a rock concert, and now Jimmy Kimmel Show.”

No Governor Perry, you were booed because you are a lousy governor. You placed your ideology over the well-being of Texas.

Jimmy Kimmel then said, “What have you done to make these people dislike you so much?” The governor responded.  “I tell people, I said [sic] Austin is kinda the blueberry in the tomato soup in the state if you will. It is a little different than the rest of the place. They do their part in keeping Austin weird.”

Of course that blueberry in tomato soup implies a Liberal Austin in a sea of Conservative Texas. Of course that is completely false.

The governor would do well to  remember that the population centers in Texas are Travis County (Austin), Harris County (Houston), Dallas County (Dallas), Tarrant County (Fort Worth), Bexar County (San Antonio), and Nueces County (Corpus Christie). When these population centers are finally mobilized, the conservative Republicans that have been ruining the states will all be voted out.

Later in the interview the governor suggested that he would decriminalize marijuana. “We’ve kind of done that,” Perry said. “You don’t want to ruin a kid’s life for having a joint.” Rick Perry gave strong hints that he will be running in 2016 for president of the United States. He said, “America is a great place for second chances.” Really? His oops moment is likely to never go away.