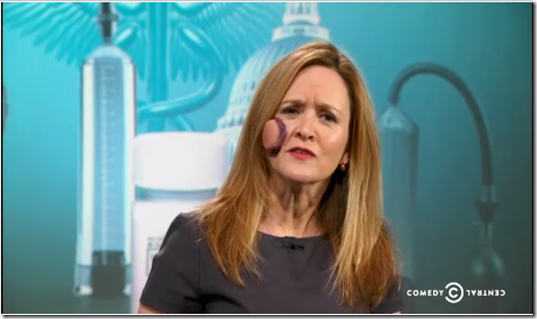 Samantha Bee did a prescient story on The Daily Show with Jon Stewart. It was real funny. More importantly it illustrates the constant double standard that women endure. She starts out the piece with a serious fact based statement.

“One of the effects of Obamacare is that insurance companies have to cover women’s healthcare needs including contraceptive,” Samantha Bee said. “But not everyone is happy about that.”

Clips from Fox News then show many snippets of Right Wing ideologues. They were hyperventilating about Obamacare covering women contraception. One woman asks why taxpayers should have to pay for an individual’s sexual choices. Sean Hannity defiantly states that women should pay for their own birth control. Mike Huckabee in a pompous rant attacks women. He accuses them of being helpless unless ‘uncle sugar’ comes in and provide them a prescription for birth control.

Samantha Bee then states that so far in 2014 Republicans have launched over 40 attacks on contraception. She then interviews the president of NARAL, Ilyse Hogue. Both Hogue and Bee provided some interesting facts.

Penis pumps have never been debated. Few even know what it is. No one ever seriously attempted to limit men’s access to Viagra or Cialis. Yet the Right Wing continuously makes a big issue about birth control for women and abortion coverage.

Samantha Bee Penis Pump skit below is amusing but probing.