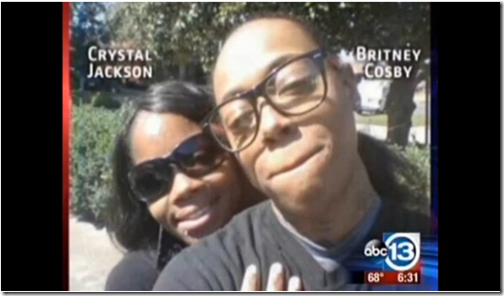 Two women were found dead in Port Bolivar on Friday March 7th. Detectives immediately believed the women were killed elsewhere and left at a dumpster. The women did not seem to be sexually assaulted. The two women were African American. They were identified as Britney Cosby and Crystal Jackson, both 24.

Crystal Jackson had a five year old daughter. She had been dating Britney Cosby for two years. They were a gay couple residing in the Houston area.

Investigators are still looking for Britney Cosby’s vehicle. The vehicle is a silver 2006 Kia Sorrento with paper tags.

On Thursday James Larry Cosby, 46, Britney Cosby’s father, was arrested for the couple’s murder. He was initially charged with two counts of tampering with evidence in a double murder of his daughter and her girlfriend, Crystal Jackson. On a rather cold hearted note, James Larry Cosby, was a part of a candlelight vigil for his daughter.

We did some checking into the accused man’s criminal history. Investigators say Cosby was just released from prison in October. And he’s a convicted sex offender whose past arrests include several assault and weapons charges. For now, Cosby remains in jail on a $500,000 bond.

James Larry Cosby didn’t like the idea of Britney Cosby, his daughter being gay

LaRonda McDonald, Britney Cosby’s grieving mother says she hates James Larry Cosby. She cannot believe he would kill his own daughter and her partner. She said he did not like the idea of his daughter being gay. She said he would always throw it in her face and they would fight a lot.

Britney Cosby and Jackson’s bodies were found dumped behind a grocery store on Bolivar Peninsula on March 7. But on Friday, Galveston County investigators returned to a house on Houston’s south side, which the young couple shared with James Cosby.

Detectives and the victims’ supporters believe it’s where Jackson was shot and Britney Cosby was beaten to death.

“Blood was all on the walls, all on the speakers — on the sofa,” community activist Quanell X said.

Family members say there have been heated fights between Britney Cosby and her father, a convicted rapist who’s also been arrested in the past on assault and weapons charges.

Detectives believe that  when they find the Kia Sorrento it will provide many more clues. Charges on James Larry Cosby could could be upgraded.