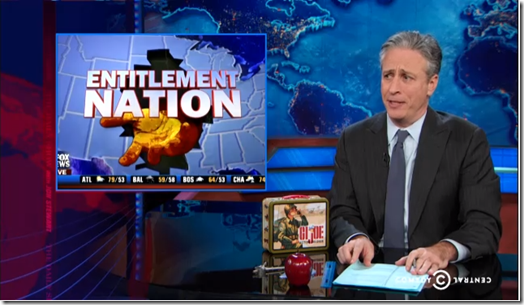 Jon Stewart was none too happy for the blowback he got from Fox News over his skit on their attack on the poor. He was pointing out that they gave the impression that a lot of poor people were gaming the system. He then played a snippet from the show Fox News was upset about.

Jon Stewart then does what he does best. He makes fun of their righteous indignation.

Jon Stewart
They get wild salmon in the East Village. I always said poor people salmon should come in a can from an outer borough.

Eric Bolling In Snippet: We are talking about the waste, fraud, and abuse in a lot of the programs.

Jon Stewart: Oh, I see the disconnect. You thought we were ridiculing you for exposing government waste. That’s a reasonable thing to expose. That’s not what were talking about. We were ridiculing the way you exaggerate the scope of public assistance abuse through random often un-provable anecdotes; hour long specials and for some reason this hand bursting through the heart of America before apparently reaching into America’s pockets for taxpayer lobster and titi bar money. “Get a job you titi bar lobster eating hand.” You see your favorite network has created the very balance narrative that ties people’s poverty to their own lack of virtue. And says that programs created to serve the impoverished are in fact the reason that those are still impoverished. Sort of the idea being, if they weren’t such $$$ people, they wouldn’t be poor. And those food stamps are just making them $$$$. Of course you didn’t say it so elegantly.

After being taken aback by the vitriol. Jon Stewart showed how Fox News used one surfer guy abusing food stamps on six different shows. He played the Fox News snippets. He Then said the following.

Jon Stewart:  My point is this. Congratulations on finding your food stamps abuse bigfoot. That one guy you found is certainly not someone that the food stamp program itself would probably point to as its greatest success story. But we make fun of you not for finding him. But for pretending that he somehow represents literally millions of Americans. I know I am being purposefully hyperbolic.

Fox News Eric Bolling In Snippet: He is the representative of literally millions of Americans.

Jon Stewart: Oh I am sorry. I meant hyper-Bolling.