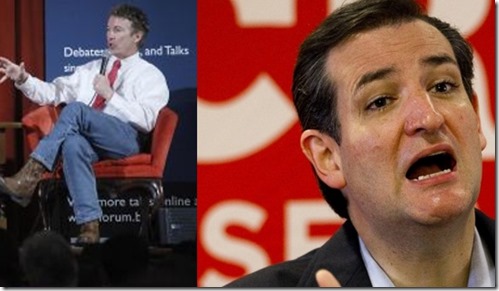 Many will balk at this post. It is important to leave echo chambers. One must explore all sides. This prevents surprises.

There is some posturing and fighting on the right flank of the Republican Party. It is rather amusing. However it foretells quite a bit. It is the war of words and policy between Rand Paul and Ted Cruz.  The Washington Post conservative blogger Jennifer Rubin decided to chime in with her piece Ted Cruz 2, Rand Paul 0.

Jennifer Rubin claims that Ted Cruz is letting it be known that Rand Paul is no Ronald Reagan. How?

In recent days, Cruz, unlike Paul, signed on to a Senate letter warning the president about a phony deal with Iran and insisting the Senate must have a say in lifting sanctions. Today, he turned it up a notch with a full-throated statement in support of tough measures to counter Russian aggression:

The President should begin the process of withdrawing from New START according to the provision of Article XIV(3) of the Treaty, which declares “Each party shall, in exercising its national sovereignty, have the right to withdraw from this Treaty if it decides that extraordinary events related to the subject matter of this Treaty have jeopardized its supreme interests;

The Secretary of Defense should engage in a full re-assessment of our missile defense posture in Europe with the purpose of restoring or expanding the installations cancelled in 2009; and

The Secretary of Defense should, in conjunction with this work, engage in a thorough review of the delays and costs over-runs of the existing missile defense programs for Europe with the goal of accelerating their scheduled implementation.

These simple steps would send a clear and unequivocal signal to Vladimir Putin that the United States is unafraid to stand with our allies for our own national security interests.

Today his sights are set on Ukraine, but if he continues undeterred tomorrow it could be Estonia, Latvia, Moldova, Romania, the Czech Republic, or Poland.  Meeting his challenge now with strength, not appeasement, would be the best way to ensure that this does not happen, and that we do not squander our hard-won Cold War victory over the Soviets.

It is rather ironic since in effect Ronald Reagan made deals with Iran including selling arms to them. Ronald Reagan painstakingly negotiated with Gorbachev with both sides providing many concessions.

Withdrawing from START is effectively starting a new cold war. It would be irresponsible. The only beneficiary would be the military industrial complex. The portion of the American plutocracy not dependent on the military industrial complex would never buy into increased taxes for such an endeavor. Further draconian cuts to the safety net would decimate any Party attempting to do so. Real conservatives and real liberals will balk at further increasing the budget deficit.

Rand Paul on the other hand have said the following about the hawkish GOP responses,

those recommendations are misguided, given the culture and history shared by Ukraine and Russia, and the damage such gestures could cause to U.S.-Russian relations.

“The Ukraine has a long history of either being part of the Soviet Union or within that sphere,” he said. “I don’t think it behooves us to tell the Ukraine what to do. I’m not excited about saying ‘hey, let’s put the Ukraine in NATO’ to rub Russia’s nose in it.”

Republicans need to remember that Russia remains a geopolitical and military power, Paul added, and that hostile rhetoric has consequences.

Jennifer Rubin scores one for Cruz on this issue. Which statement sounds saner? Which policy would Americans gravitate to? Which especially after being lied into a war that has so decimated our treasure?

Jennifer Rubin then criticizes Rand Paul for wanting to be less authoritarian on social issues. She writes.

What we see, I think, is a miscalculation by Paul about how to expand the party and his own appeal. He cannot, as we’ve discussed before, find sufficient libertarian replacements for evangelical primary voters who are staunchly Reaganite, pro-Israel on foreign policy and pro-life. The latter are too numerous and too active in primary states to ignore, let alone put off, as Paul has done.

I wrote a piece a few weeks ago discussing whether the inevitable Hillary Clinton candidacy was what we needed. I posited the following.

If Hillary Clinton is the Democratic nominee, as a Democrat it would be better than any Republican getting elected. A populist Republican with limited Wall Street ties, with a fairly liberal social stance on marijuana, marriage equality, immigration reform, incarceration (mandatory minimums), and women’s rights is out there waiting. Anyone following the news can see that Republican in the making.

Rand Paul has a lot of old baggage. America is a forgiving country. He is starting to triangulate quite well. Rand Paul is making some bold moves that ‘politicos’ better watch. Who believed an actor  would be president.