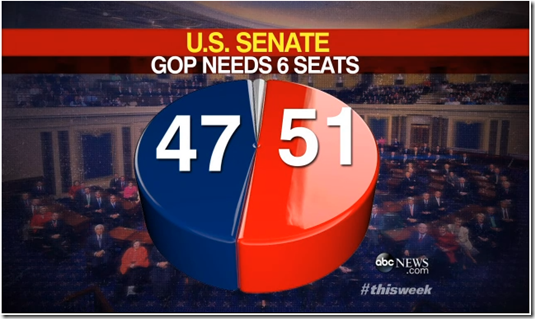 Perennial prognosticator Nate Silver of FiveThirtyEight.com has released his Senate predictions. He appeared on ABC’s ThisWeek where he provided news that Democrats are likely to dislike. He says there is a 60% chance that the Republicans will take the Senate.

Visit the Nate Silver FiveThirtyEight’s complete analysis here. As usual Nate Silver encourages everyone to read his analysis with caution. He writes.

As always, we encourage you to read this analysis with some caution. Republicans have great opportunities in a number of states, but only in West Virginia, South Dakota, Montana and Arkansas do we rate the races as clearly leaning their way. Republicans will also have to win at least two toss-up races, perhaps in Alaska, North Carolina or Michigan, or to convert states such as New Hampshire into that category. And they’ll have to avoid taking losses of their own in Georgia and Kentucky, where the fundamentals favor them but recent polls show extremely competitive races.

Nate Silver says the most reliable metric to gage an election is the generic congressional ballot. Right now they are even. Because of midterm turnout history, this likely means electorally there is a 6 point Republican advantage. Additionally there are more Democratic senators defending in Republicans states than the converse.

In plain language: sometimes one party wins most or all of the competitive races. If we had conducted this exercise at this point in the 2006, 2008 or 2012 campaigns, that party would have been the Democrats. In 2010, it would have been the Republicans. There are still more than seven months for news events to intervene and affect the national climate.

There are 10 races that each party has at least a 25 percent chance of winning, according to our ratings. If Republicans were to win all of them, they would gain a net of 11 seats from Democrats, which would give them a 56-44 majority in the new Senate. If Democrats were to sweep, they would lose a net of just one seat and hold a 54-46 majority.

So our forecast might be thought of as a Republican gain of six seats — plus or minus five. The balance has shifted slightly toward the GOP. But it wouldn’t take much for it to revert to the Democrats, nor for this year to develop into a Republican rout along the lines of 2010.

Nate Silver Goes Over His Current Analysis on ThisWeek

These polls are a snapshot in time. Instead of getting apprehensive about them, one needs to act. The electorate is always in flux and whichever party is able to break through with a middle class centric message will win. Obamacare will be a factor in the election. Currently it is a slight net negative. The tide will turn when one begins using effective truthful language, wordsmith, and examples average Americans can relate to.