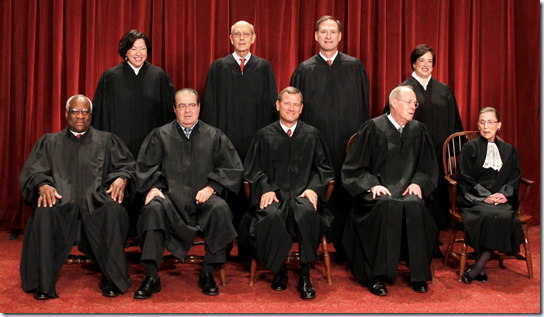 In 2010, the US Supreme Court effectively gave US elections over to corporations. They did this with its Citizens United v. Federal Election Commission ruling. That ruling was based on its decision in Buckey v. Valeo.  Buckey v. Valeo codified that spending money is a form of political speech. Because speech is a constitutionally protected right and a corporation is considered a person, its speech cannot be restricted. In effect, carte blanche was given to corporate spending on elections.

McCutcheon v. FEC is much more than Citizens United on steroids.

The McCutcheon v. Federal Election Commission is a natural progression of Citizens United. It determines whether an individual can contribute an unlimited amount of money to any candidate.

The Supreme Court ruled that the $123,200 is unconstitutional. Individual limits per candidate remains. This means ideologically similar plutocrats can now form informal consortiums and provide unlimited money to politicians of their choice.

Politicians currently spend an inordinate amount of time raising money for their next election. It means that the moneyed interests have the ear of the politician, not its constituents. If one has any doubt about what this means one simply needs to look at today’s reality.

Is there any doubt why today’s politics have become so caustic and polarized? It is a battle between the plutocrats. The McCutcheon case makes it worse. The average American citizens are simply spectators seemingly without power.

Elections matter. The McCutcheon case proves that. The plutocrats’ have a stranglehold of the traditional media.

However, Americans are not impotent. The fight by the working middle class and the poor continues.  They will get their message out. As long as the internet remains open, steady work by the grassroots can mitigate this travesty. We will win. It will take time. But we will win back our democracy.