Michael Moore has nothing more to say 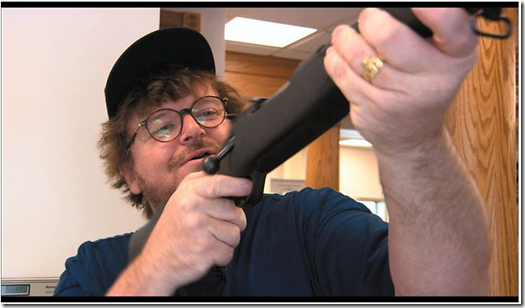 Michael Moore even while being out of words had a lot of words to illustrate his disgust, America’s disgust with the state of our gun culture after the Elliot Rodger killings. Remember when Michael Moore once thought that any release of the pictures from the Newton Massacre would be the end of the NRA? Boy was he wrong.

With due respect to those who are asking me to comment on last night’s tragic mass shooting at UCSB in Isla Vista, CA — I no longer have anything to say about what is now part of normal American life. Everything I have to say about this, I said it 12 years ago: We are a people easily manipulated by fear which causes us to arm ourselves with a quarter BILLION guns in our homes that are often easily accessible to young people, burglars, the mentally ill and anyone who momentarily snaps. We are a nation founded in violence, grew our borders through violence, and allow men in power to use violence around the world to further our so-called American (corporate) “interests.” The gun, not the eagle, is our true national symbol. While other countries have more violent pasts (Germany, Japan), more guns per capita in their homes (Canada [mostly hunting guns]), and the kids in most other countries watch the same violent movies and play the same violent video games that our kids play, no one even comes close to killing as many of its own citizens on a daily basis as we do — and yet we don’t seem to want to ask ourselves this simple question: “Why us? What is it about US?” Nearly all of our mass shootings are by angry or disturbed white males. None of them are committed by the majority gender, women. Hmmm, why is that? Even when 90% of the American public calls for stronger gun laws, Congress refuses — and then we the people refuse to remove them from office. So the onus is on us, all of us. We won’t pass the necessary laws, but more importantly we won’t consider why this happens here all the time. When the NRA says, “Guns don’t kill people — people kill people,” they’ve got it half-right. Except I would amend it to this: “Guns don’t kill people — Americans kill people.” Enjoy the rest of your day, and rest assured this will all happen again very soon. – Michael Moore

What will it take? More deaths of the “right” people is what it is going to take. 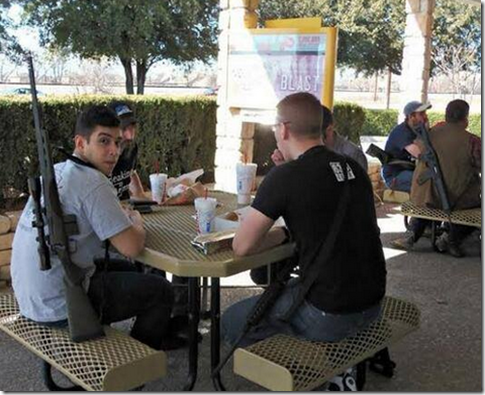 Until then, the picture above with misfits brandishing guns will be in vogue at some fast food eateries and other establishments. It just may take a few Sonics, McDonalds, and Burger King massacres on a few children to wake folks up.