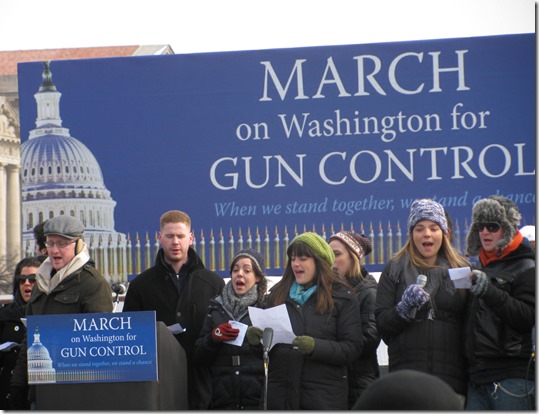 How bad is the gun violence in America? NPR’s David Schaper was covering a story about the impoverished Chicago Englewood neighborhood with a reputation for crime and violence. He was interviewing the co-founder of R.A.G.E (Resident Association of Greater Englewood) Asiaha Butler about community engagement. During the interview gunfire erupted. A bullet struck one man in a vehicle in the head.

Elliot Rodger kills 7 people and terrorizes a neighborhood by indiscriminately shooting as he drives through a neighborhood. At least 80 people were killed by gun violence the week prior to his rampage. The Elliot Rodger massacre made for sensational news and was covered nationally. After-all, these were affluent college students. The 80 people killed throughout the nation did not meet that criterion. Shouldn’t killings equivalent to a jumbo jet crashing every two weeks be covered nationally?

While it is true that the vast plurality of Americans support many forms of gun control, politicians don’t oblige. They don’t because Americans are not ‘all in’. Americans are not all in because the media allows the NRA, Republican talking points, and the right wing to cloud the realities.

How many know the following facts?

These facts are rarely used as counter arguments when the NRA, Right Wing, and Republican politicians are regurgitating their misinformation. The traditional media simply allow themselves to be a platform for free disbursement of the misinformation of these groups. As such they are co-conspirators in the failure of our society to force politicians to put into effect meaningful gun control.

. Australia proves that gun control can make a very big difference. Yet the traditional media seem devoid of the ability to report on fact bases information in any coherent manner.

Over the last few years it has been comedians and satirists that have been delivering fact based information. That is the state of our traditional media. This three part series by John Oliver on the Jon Stewart’s Daily Show is a case in point.

Imagine how different it would be if all news networks covered this story. A country similar to America adopted gun control. Some of its politicians sacrificed themselves for the better good of society by passing substantive gun control laws. After several years the evidence is in. Gun control works. Imagine if we really had a traditional media the nation could actually count on. Our gun control impotency is another failure of the traditional media.