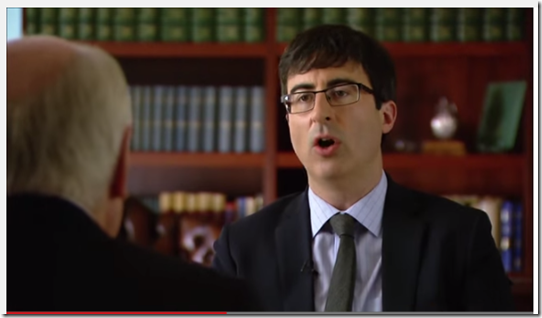 One must be amazed that the American traditional media has allowed the NRA and Republican talking points to define the gun control narrative. This is no different than what they did and continue to do with the Affordable Care Act (Obamacare) debate. They continue to allow misinformation to lead the public discourse.

America is no longer at the forefront of many issues that make life better for average American citizens. Other countries have implemented programs successfully that could provide Americans with actual evidence of success. A responsible media would report these realities to  Americans to counter lying and misleading talking points. Unfortunately, most of the times they do not do that. Worse, they give lying or misleading talking points equal weight in the debate.

Over the last few years it has been comedians and satirists that have been delivering fact based information. That is the state of our traditional media.

The three part series below by John Oliver on Jon Stewart’s Daily Show is a case in point. It should be watched especially after the Elliot Rodger killings, yet another massacre in the United States. John Oliver examines in a very entertaining manner gun control in Australia. The conclusion is that it has provably worked. Yet even the avid gun control advocate Michael Moore seem too be giving up.